Heaton Park Tramway look ahead to a busy 2022

Posted on Wednesday 5 January 2022 by Gareth Prior

The 2021 season has just come to an end for the volunteers at the Heaton Park Tramway after the conclusion of their after dark running during the Lightopia event but that doesn’t mean that they are resting on their laurels as plans are now being formulated for an even busier 2022! With a delayed birthday celebration, a two day Tramtastic event, a new models exhibition and a night photography event there should be plenty of excuse for you to pop along to the UK’s only truly preserved tramway!

The current plan (subject to all the usual caveats) is that the tramway will reopen to the public from Sunday 3rd April when there will be a celebration of their 40th (+2!) birthday including the reopening of the shop and museum.

Then on Saturday 2nd and Sunday 3rd July there will be a special two day Tramtastic event where you can expect trams in service plus the chance to see some of those trams not currently in service.

The first weekend of September will see the return of a model event to the Heaton Park Tramway – All Models Great and Small will take place on an exact date to be confirmed and will showcase various model layouts.

And then on Saturday 22nd October there will be a new night photography event taking place after the tramway has closed for the day with posed shots and photo opportunities in abundance.

Another new innovation for 2022 will be a connecting bus service between the Heaton Park Tramway and the Greater Manchester Museum of Transport once a month from April until August. Its planned this will operate on Sundays 24th April, 29th May, 26th June, 31st July and 28th August and subject to availability both Stockport 5 and Manchester 765 should be running at the Park on each of these dates.

2022 looks set to be a busy and exciting year at the Heaton Park Tramway! 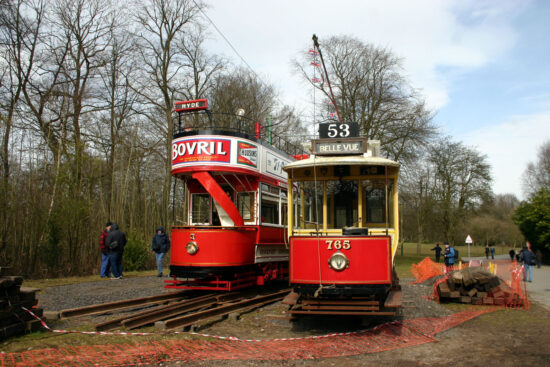 The pride of Greater Manchester’s tramway heritage! Stockport 5 and Manchester 765 at the Heaton Park Tramway on 24th March 2013. (Photograph by Gareth Prior)