Posters promoting the proposals for heritage tram operation over the late August Bank Holiday weekend (24th – 26th August) have now begun to appear at the designated heritage tour stops in Blackpool. These prominently mention both Open Boat 602 and Centenary car 648, which are expected to make their debuts on the heritage service with fresh paintwork that weekend.

Work on car 648 is believed to be nearing completion, after the tram missed its planned launch into traffic last month due to the need to undertake more significant body work than was anticipated. This tram will appear in the original Centenary car livery of green and cream featuring green zig-zags along the bodysides and lining-out in a paler shade of green. Although these cars are certainly not the most popular trams to have operated in Blackpool over the years, with some very ugly modifications added on in their later lives, it is easy to forget just how smart the class actually looked when new, and as 648 was overhauled sympathetically several years ago its external appearance should closely resemble how it looked when it was built. Judging by the well-received appearance of sister car 642 earlier this year, 648 is expected to be very popular when it finally returns to use.

Probably even more exciting than the welcome return of 648, however, will be that of Open Boat 602 which is currently being prepared for a repaint into the 1920s Blackpool Corporation livery of cream and red. As 602 hasn’t run since November 2010, its comeback is already highly anticipated and this new livery will make its return to service one of the highlights of the August heritage service. This could also open up the possibility of three Boat cars operating simultaneously in Blackpool, which has not been possible since the 2009 illuminations. After some very wet weather greeted the launch days of Boat cars in various locations last year, let us hope that the August Bank Holiday will be a dry one so that we can enjoy 602 at its best!

However, enthusiasts eager to sample a ride on a green and cream liveried Centenary car don’t have to wait until August to do so. As announced previously, the Fylde Tramway Society have arranged a tour on Saturday 20th July which will feature 648 alongside ‘Princess Alice’ 706 (weather permitting), giving a flashback to 1985 when 706 first ran in its current condition and 648 entered service for the very first time, as GEC test tram 651. Details of this event can be found on the FTS website, and tickets are on sale now. 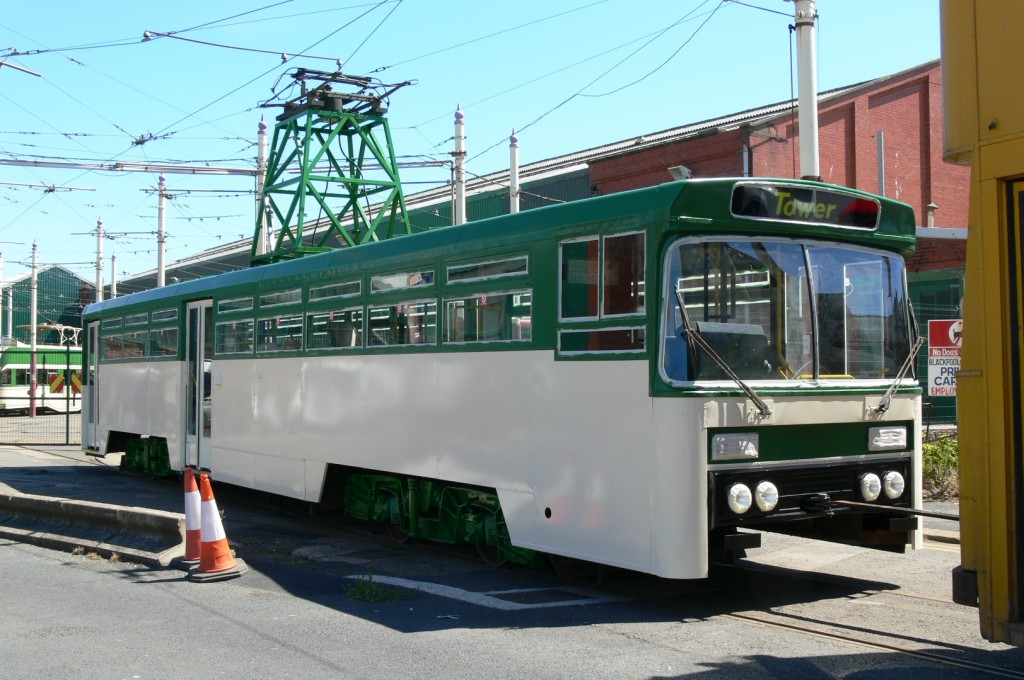 On May 25th, the incomplete 648 was displayed outside the Rigby Road depot to show off its partially completed paintwork. This tram will be one of the star attractions in Blackpool for the next Bank Holiday weekend in August. (Photo by Andrew Waddington)