Posted on Friday 29 October 2021 by Gareth Prior

The next location for our Traditional Tram (not in Blackpool!) edition of “Picture in Time” is the Isle of Man as for the next few weeks we head back to September 1990 for a selection of images.

Where else would we start than with one of the Guinness Book of World Records entrants? Captured inside the Derby Castle Sheds of the Manx Electric Railway this is no. 2 – one of the two remaining cars which inaugurated services on the MER way back in September 1893. Now recognised for the fact that it is one of the oldest trams to still run on their original tramway 2 has become a celebrity in its own right, or at least alongside its sister car no. 1 in more recent years but that’s not to say it still wasn’t special in September 1990!

At this time in history 2 was carrying this maroon and cream version of the original Douglas & Laxey Coast Tramway livery, versions of which it had been carrying since overhaul in the winter of 1980/1. It has since received a couple of different liveries and is now in what most would consider a traditional colour scheme.

Also seen in this photo is its sister car 1 (just behind 2) with a further car at the very rear of the shed while on the right we can see Tunnel Car 6. 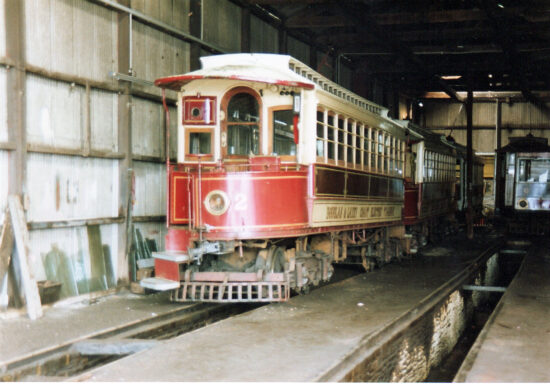