In Pictures: Works start at city end of Leith Walk

Posted on Wednesday 20 October 2021 by Gareth Prior

The next significant stage of tram construction works in Edinburgh have now got underway with a new worksite created at the city end of Leith Walk which will, in time, see the existing line to York Place connected with the full Trams to Newhaven project. Work got underway over the weekend of 9th/10th October and there has already been progress made on initial works.

Morrison Utility Services have been the first of the construction contracts to move into the area and they have started ground excavation works ahead of utility diversions. This will also see the archaeologists involved to check any finds during this stage of the works.

The works in this section will be split into three phases. The second will get underway in January 2022 and will see the worksite extended from Picardy Place to York Place. Then the final phase will see the existing York Place stop removed so that it can be replaced by through track. As part of the project this stop is to be replaced by one in Picardy Place. All the work here is due to be finished by autumn 2022. During the final phase of works tram services from the Airport will have to terminate at St Andrew Square. Its not yet clear whether this will remain the case until the full line opens or whether the line to Picardy Place may open ahead of the rest. 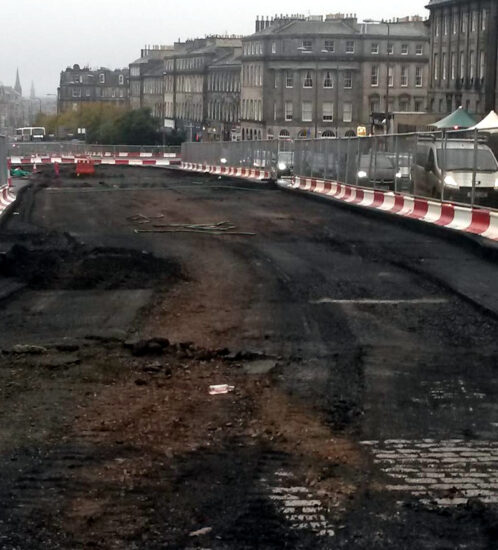 This first photo shows the view from the top of Leith Walk looking north towards Leith where the road surface has been removed. The new track extends from Leith up to the low level red and white barrier. In the foreground are some of the sets which would have formed part of the paving for the first generation trams on Leith Walk. 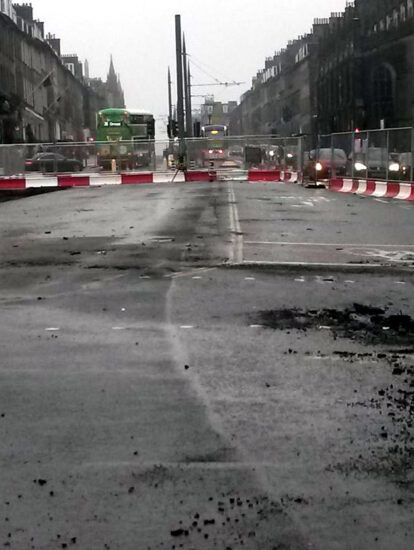 Turning 90 degrees to the left this view shows Picardy Place where the new tram stop will be situated. In the distance a tram waits before commencing its journey to Airport. (Both Photographs by John Hampton)