Posted on Wednesday 20 October 2021 by Gareth Prior

A public conversation – like a consultation but different! – into the plans for Greater Manchester’s Bee Network which would see a fully integrated transport network in the region by 2024 (buses, trams, cycling and walking) with trains being included by 2030 has been launched by Andy Burnham, Greater Manchester Mayor to hear what matters to people for a transport network.

Utilising the Bee symbol the network aims to transform how people travel in Greater Manchester with seamless end-to-end journeys with the branding intended as a trusted guarantee of a good service. The Bee Network is planned to be a London style transport system joining together buses, trams, cycling and walking by 2024 with rail also included by 2030.

Andy Burnham said: “The people of Greater Manchester deserve a world-class transport network where you can seamlessly travel across the city-region on buses, trams and trains – without spending a fortune each time.

“The decision to franchise GM buses and bring them under local control was the first major milestone in building the Bee Network. It means that decisions can be made at a local level for the benefit of our passengers and ultimately improve the lives of Greater Manchester’s diverse communities.

“That’s why we’re now asking for people’s input on this key conversation about active travel and public transport across the city-region in the coming weeks. We want to know what people need and expect from the Bee Network and I urge as many people as possible to get involved.”

The Bee Network will be accessible, affordable and easy to use with a daily fare cap and single multi-modal ticket available.

Included in the conversation will be considerations on whether bikes and dogs should be allowed on Metrolink along with Bee Network values and customer standards. This will be your chance to input to the new network which is hoped to revolutionise transport in Greater Manchester.

And to publicise the conversation some Manchester Metrolink trams have received special Bee Network vinyls. At least 3062 and 3089 have received these so far. 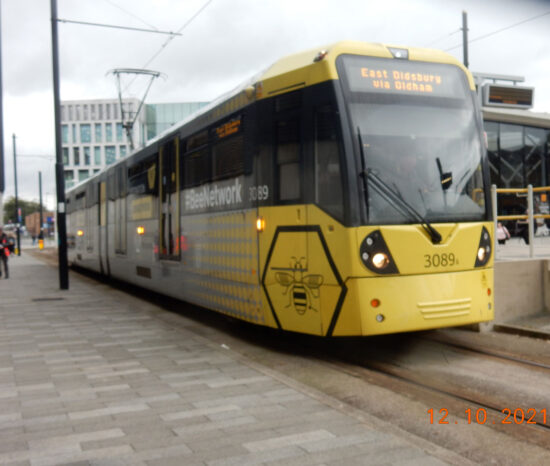 3089 with its Bee Network vinyls applied including the logo on the lower section and #BeeNetwork on the windows. This is Rochdale Town Centre. (Photograph by Paul Gilbert)