Since trams returned to service at Beamish on 4th September they have only been able to run to the outskirts of the town with a temporary terminus provided at Town East, but all that has now changed with Wednesday 22nd September seeing trams running actually into the “town centre” with different stops provided for setting down and picking up.

It is now expected that this pattern of operation will be in place for the remainder of the season. Trams will continue to run from Foulbridge (the stop by the tram depot) around the museum to the town with inbound services terminating at the inner circuit stop by the Bandstand. Trams then pull forward to just past the end of the double track section where the crews reverse the seats and trolley before the tram moves back into the town and loads more passengers at the standard outer circuit stop. The section of tramway from the town to Foulbridge remains closed awaiting the completion of maintenance works. 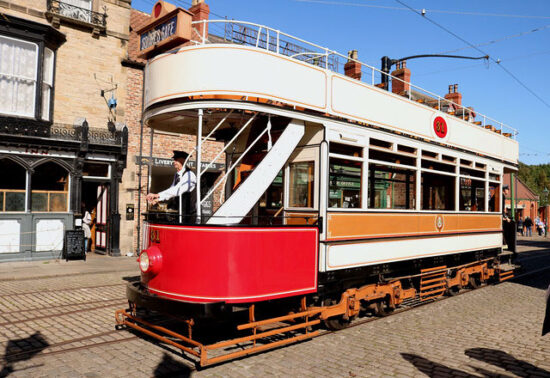 Blackpool 31 was the tram of choice on 22nd September – judging by the cloudless skies a very sensible decision! – and is seen here outside the Co-op in the town where it has just dropped its passengers off (the usual tramstop was occupied by a bus so it was unable to access it on this journey).

Inside the depot at Beamish where Newcastle 114 is seen over the pit to allow its overhauled motors to be refitted. Grimsby & Immingham 26 is alongside with Sunderland 16 also putting an appearance in. (Both Photographs by Trevor Hall, 22nd September 2021)