Posted on Friday 17 September 2021 by Gareth Prior

Its September 1976 again as we return to Blackpool for this edition of “Picture in Time”.

Featured today is Brush Car 634 which is in a colourful and short-lived special livery to mark the Centenary of Blackpool Borough (Blackpool had received its Charter of Incorporation as a Borough on 21st January 1876). Applied in the April of 1976 it would remain in place until October 1976 so by the time of this photo only had a short period of time left before it would lose this livery. With roof advert boxes in place, the Blackpool Borough crest on the trolley tower plus a couple of seagulls on the yellow and blue wavy lines (who says giant seagulls on trams was a modern invention – as seen on Flexity2 016 and its Freeport livery).

This photo shows 634 running along Lord Street, Fleetwood as it returns to Starr Gate on route 5 (as seen with the route number card in the cab window). 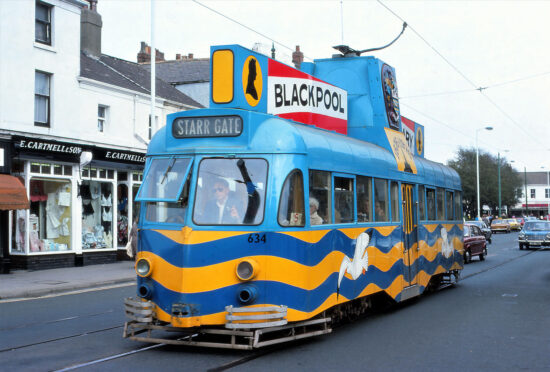