Whatever Happened To? Crich Tramathon 2005 – Blackpool 4

Posted on Monday 23 August 2021 by Gareth Prior

We’ve covered the trams which ran in passenger service during the 2005 Tramathon at Crich but 12th June 2005 also saw a number of other trams and works vehicles which were out on the mainline for various different reasons. In this category we start off with probably the most exciting of these – Blackpool 4.

Blackpool Conduit car 4 is over 135 years old having been built for the opening of the Blackpool Tramway in 1885. Originally built for use on the conduit system it would be converted for overhead operation in 1894. If you look at the history of this tram, and consider how old it actually is, its surprising to realise that for those 135 years it has been around no. 4 has only been an operational passenger car for a little over 20 years. Converted into a works car in 1905, it was this which probably allowed it to survive long enough to be preserved. Withdrawn from works duties in 1935 it was stored at the back of the depots until 1960 when it was restored as no. 1 for the 75th anniversary of the tramway. The TMS took ownership in 1963 but it didn’t make the move to Crich and was instead displayed at the British Transport Museum in Clapham until 1973. Storage followed before finally arriving at Crich in 1979. It was then restored to near original condition for the 1985 centenary which included the fitting of batteries to mimic conduit operation. After operating in Blackpool it returned to Crich for static display but in 2005 with the 50th anniversary of the TMS it was decided to operate it again with it out on the mainline for demonstration runs.

2005 was a highlight for no. 4 as since then it has returned to being on static display and with the historic value of the 135 year old tram considered it is likely to remain like this in the future. 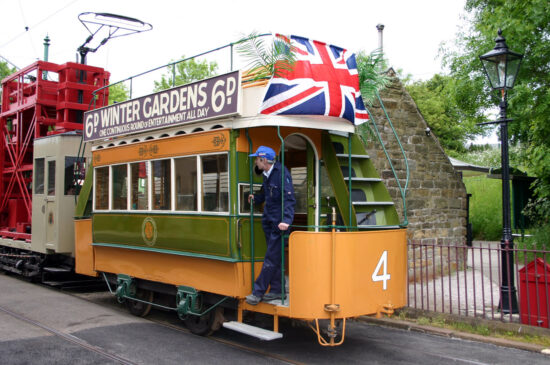 Blackpool 4 sits at the front of a queue of trams at Stephenson Place on 12th June 2005. 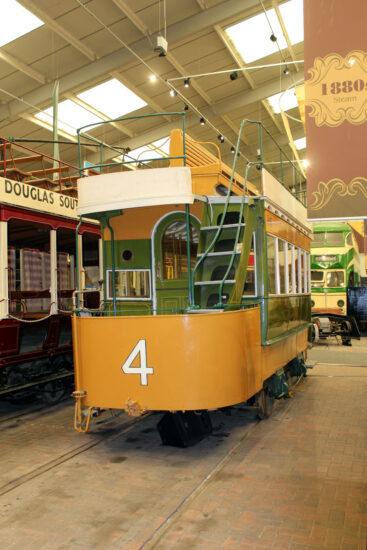 Today and 4 can be found in the Great Exhibtion Hall where it is displayed to represent the start of electric trams in the UK. This was on 1st September 2018. (Both Photographs by Gareth Prior)