Whatever Happened To? Crich Tramathon 2005 – Southampton 45

Posted on Monday 16 August 2021 by Gareth Prior

It was the tram that in effect started the Tramway Museum Society and it is the last car which ran in passenger service during the 2005 Tramathon. Today “Whatever Happened To?” features Southampton 45.

Southampton 45 – built in 1903, withdrawn in 1948 – was acquired by Light Railway Transport League Museum Committee during a tour of the Southampton system in August 1948. Costing £10, at that time there was no tramway preservation movement in the UK so although they now owned a tram there was nowhere obvious for it to go. It spent time in Leeds and Blackpool before it was put on display at the Montague Motor Museum in Beaulieu, Hampshire from 1958. It would arrive at the new Crich museum site in 1960 and would first enter service in 1964. By 2005 it had operated in most years at the museum and as an open topper was always a popular choice as well as giving a good comparison with other open toppers thanks to its top deck knifeboard seating.

In more recent years, Southampton 45 has spent long periods out of service although has still managed to appear as historically significant events. It was initially withdrawn after the 2012 season but would see a return in 2014 for the 50th anniversary of the start of electric tram services. Now on static display in the depots it is one of a growing number of trams which needs workshop attention before being considered for commissioning again. 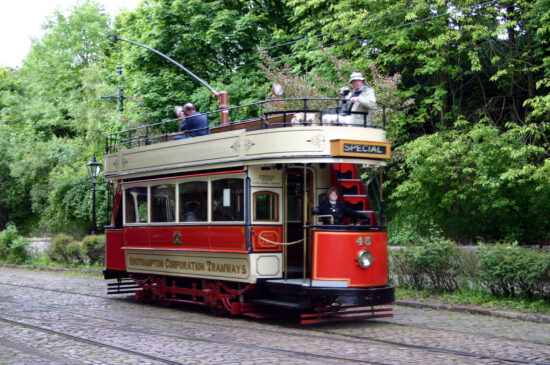 Southampton 45 passes the entrance to the depot during the 2005 Tramathon on 12th June as it heads down to Town End. 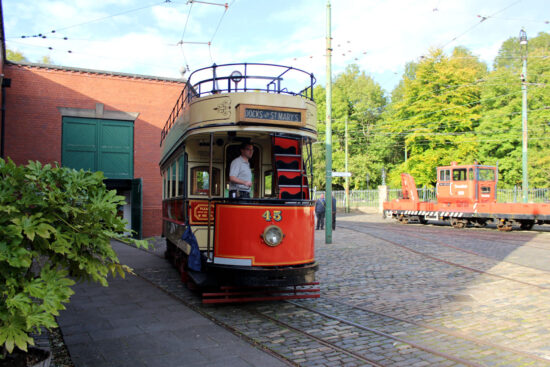 16th September 2017 and Southampton 45 is shunted around the depot yard. (Both Photographs by Gareth Prior)