Posted on Friday 13 August 2021 by Gareth Prior

Today “Picture in Time” continues its look at trams in operation at Crich on August Bank Holiday Monday 1979.

We have now returned to Wakebridge and it looks as if even though its Bank Holiday – or maybe because it is! – the weather isn’t exactly blazing hot sunshine with jackets the order of the day for crews and passengers! In this photo we see Blackpool Toastrack 166 arriving at the stop – with fellow Blackpool car 49 following on behind and New York 674 to the left – as it heads up the line.

166 had arrived at Crich in 1972 after use  as a mobile television platform on its home system and would become the very first tram to receive a total rebuilt before entering service at the museum. This took around two years with 166 entering service at the 1974 Extravaganza. After that it has been in service more often or not but is currently waiting for attention in the Workshop before it can run again. 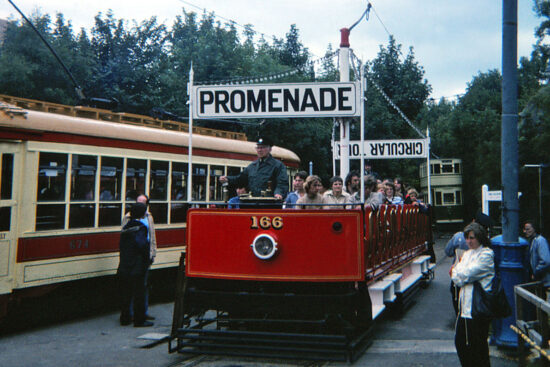