Posted on Friday 9 July 2021 by Gareth Prior

In this edition of “Picture in Time” we again feature a tram on Manchester Metrolink before services began in 1992.

This is the last of a trio of images we have included of trams where the number cannot be determined with the numbers originally only carried on the sides of the T68s (it was to be much later when end numbers started to be carried as well) and this a pretty much end on view. Again dated as 25th February 1992 this photo shows the T68 within Victoria Station and passes what would become platform A when the stop opened later in the year. This platform was used by Bury bound trams with the area where we are used to the stop being today being served by trams heading in the opposite direction.

There still seems to be construction work ongoing here with the Mowlem signs letting you know who’s responsible. This tram has its destination blind set as “Sorry Not In Service”. 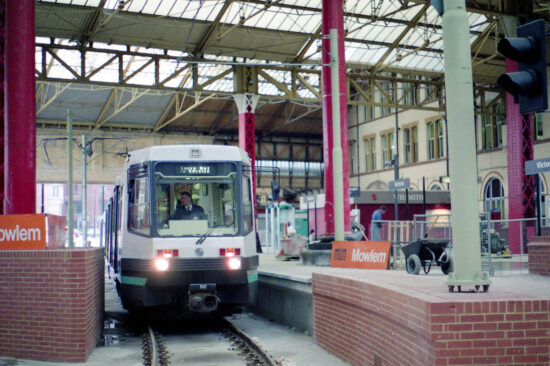