Posted on Monday 5 July 2021 by Gareth Prior

In today’s edition of “Whatever Happened To?” we take a look at London County Council 106 another of the trams to run during the 2005 Tramathon at Crich.

Dating from 1903, London County Council 106 is a tram which probably owes its continued existence to its conversion to a snowbroom after withdrawal as a passenger car. It was converted in 1925 and would remain in use as no. 022 until 1952. It was selected for preservation by the London Transport Executive and was first displayed at the British Transport Museum in Clapham. The London County Council Tramways Trust took ownership of the tram and started a restoration in 1971 and would be launched into service at Crich during 1983. By the time of our feature event it had spent a couple of years out of use for workshop attention but was now back in action.

Unfortunately, this period of service was short-lived as it was withdrawn again in 2007 and was confined to the depots until when, in 2013, the London County Council Tramways Trust offered to fund an overhaul which saw 106 returned to service two years later. In 2016 it became the very first short-term tram loan at the East Anglia Transport Museum for a special London event. It remains operational today and has been a regular performer in 2021. 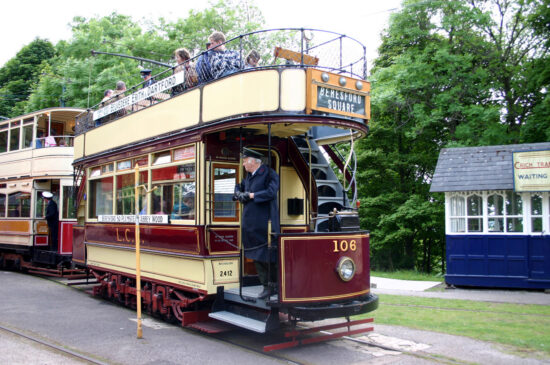 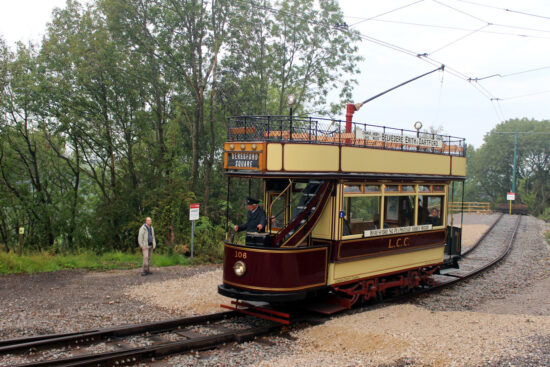 22nd September 2019 and there are a lot fewer passengers around – probably explained by the weather and that its an open topper! – as 106 draws forward at Glory Mine. (Both Photographs by Gareth Prior)

1 Response to Whatever Happened To? Crich Tramathon 2005 – London County Council 106