Posted on Friday 2 July 2021 by Gareth Prior

Today’s “Picture in Time” is again close to Victoria Station in Manchester City Centre as we feature another unidentified T68.

This below image could well be the same unidentified tram as we saw last week as it heads away from the camera and up Balloon Street. Victoria Station is just behind the photographer and as the tram climbs Balloon Street it will approach the location today of the next stop on 1CC (which then was just the only city crossing!) at Shudehill. Where today you can see a bus interchange on the land on the far left hand side in the distance in 1992 it had yet to be built giving a clear view towards the city centre.

This image is dated as 25th February 1992 – a couple of months before public services would run along this stretch of track. 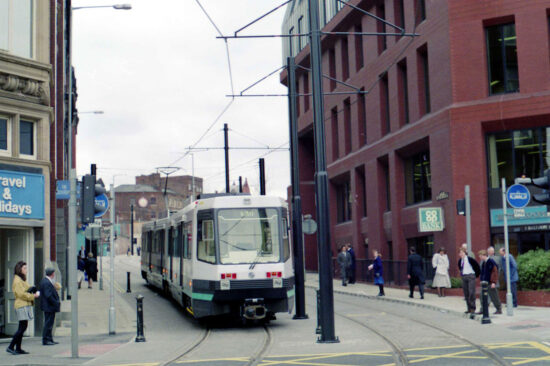