Whatever Happened To? Crich Tramathon 2005 – Liverpool 869

We return to looking at the trams which ran during the 2005 Tramathon at Crich and where they are now in “Whatever Happened To?”. This time out we are featuring Liverpool 869.

Liverpool 869 was built in 1936 in Liverpool Corporation’s own workshops at Edge Lane just the second of what would eventually be a class of 163 “Liners”. Although Liverpool’s tramway would run until 1957 by that time 869 had started a new life in Glasgow where it was renumbered as 1055 and entered service in 1955. It would only run in Scotland for five years being withdrawn in 1960. It moved from there to Leeds and then on to Liverpool before it would reach Crich during 1979. Initially on loan to Crich from the Merseyside Tramway Preservation Society its ownership was subsequently transferred which would allow the tram to start a full restoration in 1990. It would finally enter service for the first time in 1993. Twelve years later and it was a regular member of the operating fleet.

The tram missed the entire 2020 season with a lower number of trams required than usual but it has been commissioned for use in 2021 and has been used on a handful of occasions already this year. 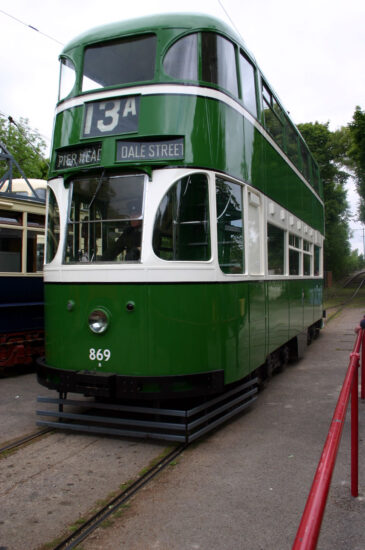 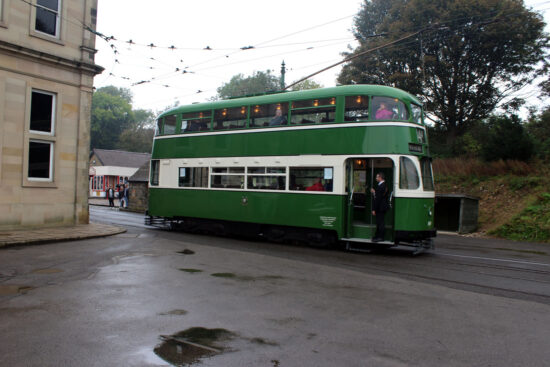 Then on 22nd September 2019 and 869 is just leaving the Town End terminus heading up the line during day two of the Crich 60 event. (Both Photographs by Gareth Prior)

2 Responses to Whatever Happened To? Crich Tramathon 2005 – Liverpool 869