This latest edition of “Picture in Time” is in Blackpool as we go back over 25 years to view one of the iconic Balloon cars.

In this photo we see 703 on 25th June 1995 showing off its popular coat of Wartime Green and Cream complete with trolley fitted. It is just approaching the stop at Tower on its way to Fleetwood but for those passengers waiting further north they may be disappointed as it already seems to have a pretty full load. In the distance we can see Railcoach 680.

Of course, Balloon 703 started off as an open topper when it entered service during 1934 but 240 (as it was at the time) became fully enclosed in early 1942. Receiving single indicators in 1956 and a pantograph in 1991 the tram still retained its roof windows throughout. Withdrawal came in 2009 and after the Lancastrian Transport Trust took ownership it spent some time running as Sunderland 101 at Beamish. Eventually returning to Blackpool the tram is again in the ownership of the Fylde Transport Trust (as they are now called) but currently waits for attention before it can be considered for service again. 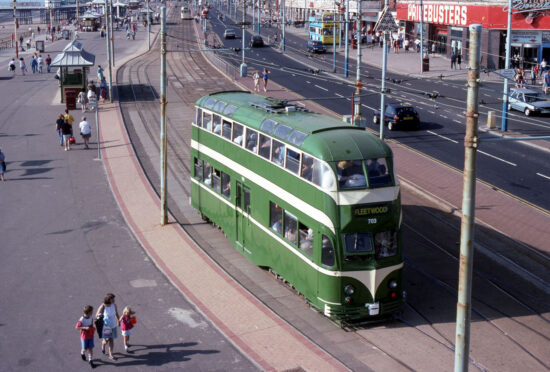