Ride the lights with ‘HMS Blackpool’

On Tuesday 27th August, the Fylde Tramway Society will be hosting an illuminations tour with a difference, when it hires the illuminated Frigate 736 ‘HMS Blackpool’ for a private tour. This follows a three-day period of heritage tram operation in Blackpool over the summer Bank Holiday weekend (24th to 26th August inclusive), making this an ideal time to visit Blackpool and enjoy the delights of the traditional tram fleet.

A unique opportunity has arisen to operate a tram tour on this Tuesday thanks to the popular ‘Ride the Lights’ event. This is effectively a preview of the world-famous Blackpool illuminations before the main ‘lights’ season begins, aimed primarily at cyclists. For one evening only, the promenade road will be closed off to all road traffic apart from bicycles, allowing excellent views of the illuminations including some brand new displays for 2013. Many people also choose to preview the lights by tram, although Blackpool Transport have never operated any illumination tours during this event. However, the FTS has stepped in to arrange such a tour, which will see Frigate 736 in action. If demand is sufficent, a second car may be added to the tour.

The tour is expected to commence from North Pier at 4:30pm, giving plenty of opportunity to see and photograph 736 in daylight. The car will also be running through to Fleetwood Ferry, having not yet done so since the line re-opened following modernisation. Indeed its last visit to the northern terminus was probably in the spring of 2009, when it was frequently used on the core service due to a focus on single-deck trams, of which few were available, resulting in the illuminated cars being called upon for more mundane duties than they were used to!

Further details of this event and a booking form can be found at http://www.freewebs.com/fyldetramwaysociety-blackpool/ridethelightstour.htm

Incidentally, tickets are also now on sale for another FTS tour on Saturday 20th July, the day before Fleetwood Tram Sunday, featuring Centenary car 648 and ‘Princess Alice’ 706 (to be replaced by Standard 147 if wet) and these can also be purchased by visiting the Society’s website, using the above hyperlink. 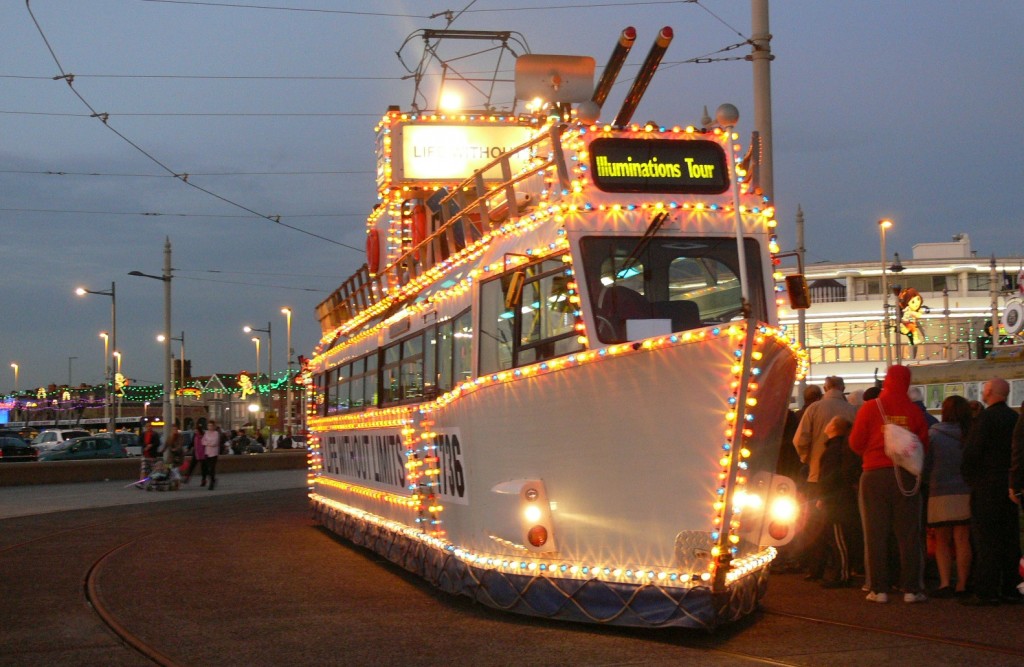 'HMS Blackpool' is pictured loading eager passengers at Pleasure Beach for a circular tour of the illuminations last season. (Photo by Andrew Waddington)