This week’s Blackpool edition of “Picture in Time” takes us back to the spring of 1976 as we again find ourselves on the Prom.

Taken outside the Lewis’s store – this time we see the Prom entrance to the store in the background – two trams are seen. On the left is OMO 6 which is heading north with a timetabled service while on the right is Coronation 660. The Coronation has Reserved on the destination blind so is presumably on some sort of Private Hire.

1976 was the third year in service for the OMO car which had been rebuilt from English Electric Railcoach 617 and entered service in April 1973. It had lost its Plum and Custard livery and was now running in Red and White but would have a further 11 years of active service with withdrawal coming in 1987. It was then scrapped in Rigby Road Yard the following year. As for the Coronation it was by now the last of the class to be running with the last of the others having run during 1975. With Z controllers fitted since 1967 it remains in Blackpool today although is stored requiring workshop attention before it can run again. 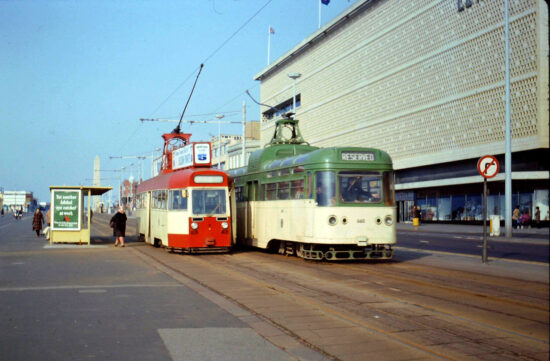