Before we move on from Croydon we feature an image of a tram which received an all over advert before the system had even opened.

CR4000 2542 arrived in Croydon from Austria on 22nd February 1999 in the standard fleet livery (at the time) of red and white but even before the first public runs had taken place in May 2000 it lost these colours in favour of an advertising livery. The sponsor of the tram was Amey Construction who, as we have seen over the past few weeks, were involved in the consortium who constructed the system back at the turn of the century and presumably this livery was done as part of their contract. Featuring a mainly yellow base it was contravision free (probably before contravision was much of a thing on trams!) ad and would be in place between October 1999 and October 2001.

This photo shows the tram outside the depot. 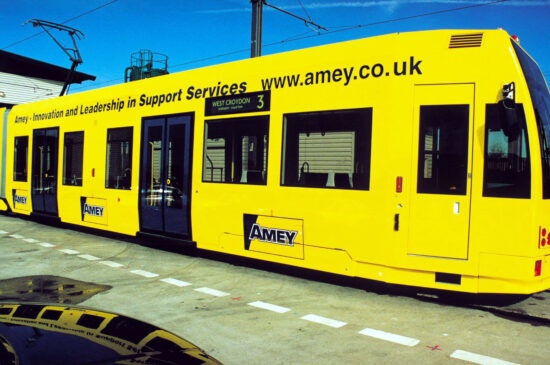