Around the World in Trams: Postlingbergbahn 501

Our world tour is back in Europe for the next few editions as we enter Austria and take a look at the trams which operate in Linz.

Trams in Linz can trace their history back to 1880 when horse trams first ran before conversion to electric operation in 1897. Running on a 900mm gauge there are currently five lines which operate – which includes line 50 which is the Postlingbergbahn mountain tramway which has been integrated since 2009. The system is operated by Linz AG. With lines 1 to 4 operated by single ended trams each terminus has a turning loop.

Our first photo is on the Poslingbergbahn mountain line which first ran in 1898 and was originally built to a metre gauge but in 2008 was rebuilt to the 900mm gauge to allow full integration with the other tram routes in the city. In order to operate the rebuilt line a fleet of four trams were built by Bombardier based on the Flexity Outlook design but designated as Mountainrunners. This is the first of those cars – no. 501 – at the Postlingberg summit on 4th August 2012. 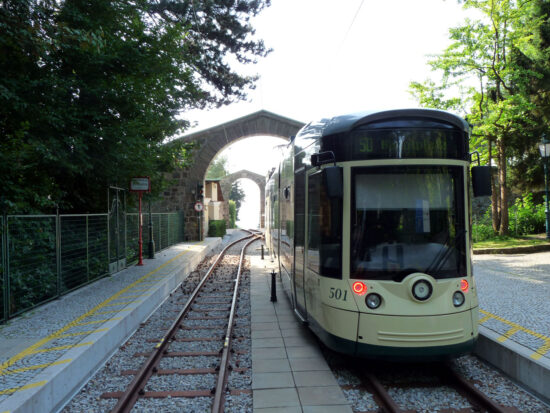