No seat swap for Balloon 700

British Trams Online has previously reported that two Blackpool trams had exchanged seats, these being Brush Railcoach 631 and ‘B Fleet’ Balloon car 700. The seat swap was first mooted late last year in order to restore swingover seats to the heritage Brush car, although the expected replacement of the traditional seating with fixed bus seats on the top deck of car 700 was a disapointment to many. However, a ride on 700 over the recent Bank Holiday weekend has confirmed that this plan has not materialised after all and 700 remains largely unaltered upstairs.

In a change of plan, 631 has been fitted with various swing-over seats that were held in reserve at Rigby Road depot. Although the seat cushions used are a mish-mash of different styles and colours, this has allowed the pioneer Balloon car to retain at least some of its dignity, after being considerally modified in 2010 for use as a service car on the upgraded system.

For those who are struggling to keep up, 700 now features fixed seats on its lower deck trimmed in green PVC material. These were salvaged from car 721 and had to be installed to allow more grab rails to be fitted to the seat frames, a requirement now that 700 is considered a service vehicle on a light rail system rather than a designated heritage tram. As stated above, the swing-over seats on the top deck remain in situ and despite a few changes, such as an illuminated ‘Stop’ sign at each end to indicate when the car is stopping (bet you would never have gussed that!), a top deck ride on the tram is a highly recommended experience, and makes it easy to forget how the car has been modified in recent years. The tram also retains other oddities such as its double destination indicators, roof windows and mock ventilators, although it now carries the new purple and white fleet livery.

We apologise for any confusion previous reports may have caused, and hope that readers will be pleased to know that Balloon 700 retains some sense of nostalgia, if only upstairs! 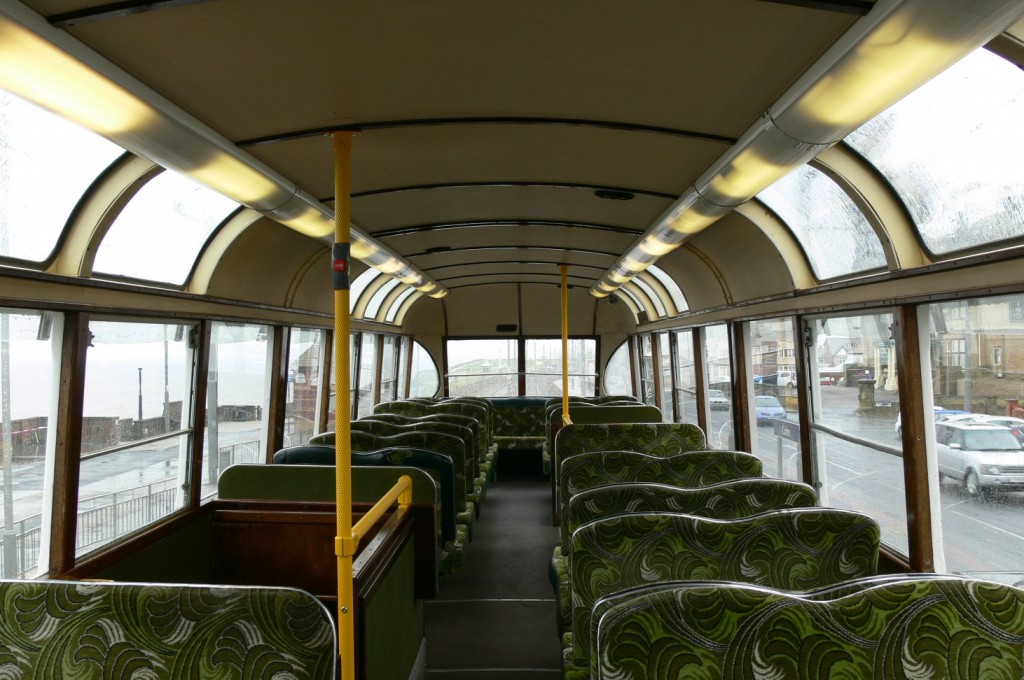 A recent view showing the top deck interior of Balloon car 700, still retaining its 'proper' tram seats and much of its traditional charm and character. (Photo by Andrew Waddington)

4 Responses to No seat swap for Balloon 700