Posted on Thursday 1 April 2021 by Gareth Prior

Another big milestone in the restoration of Warrington 28 to service on the Wirral Heritage Tramway has been reached with the return of a fully overhauled truck for the tram.

The restoration of Warrington 28 has been ongoing at the Wirral Transport Museum for some time but excellent progress has continued to be made – when restrictions have allowed of course! – with the tram now really starting to look the part. The tram – which is really Warrington 2 – is being restored as an open balcony car as this helps to add a different type of tram to the tramway fleet and is sure to be another pride of the fleet when its restoration is completed!

The truck is a ex-Lisbon truck which has been regauged and overhauled by Alan Keef Ltd in Herefordshire over the past 18 months. With this work now completed, the truck was able to be delivered to Birkenhead on 1st April 2021. Unloaded and positioned in the tram depot/transport museum it will be fitted under the tram in due course although currently work is suspended until restrictions allow a resumption. 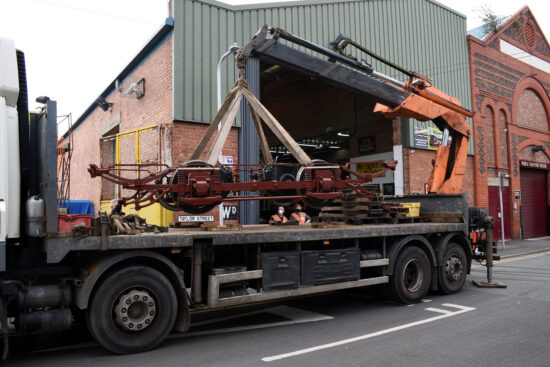 The truck is unloaded outside the Wirral Transport Museum on Taylor Street. 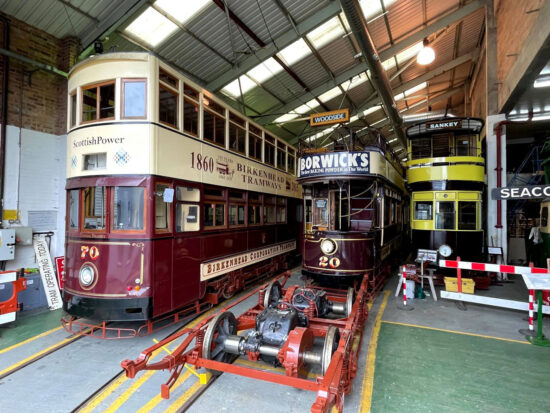 Safely down on the tracks at the front of the tram depot/transport museum. Warrington 28 is the tram on the right with Birkenhead 20 immediately behind the truck and Hong Kong built 70 to the left. (Both Photographs courtesy of the Wirral Transport Museum and Wirral Heritage Tramway Facebook page)