Posted on Monday 8 March 2021 by Gareth Prior

In this latest instalment of “Picture in Time” we are again in Blackpool with the last of the OMO cars featuring in this image.

OMO 13 would only have an operating career of eight years, entering service just a few months before this early September 1976 view and then being withdrawn from service in June 1984. Scrapping then came in March 1985 in Rigby Road Depot. It had been rebuilt from English Electric Railcoach 618 which had run up until the end of October 1975.

In this photo we see 13 outside Lewis’s department store (opened 1964) as passengers wait to board at the front entrance with it seeming that the driver is indeed collecting fares upon boarding. The tram looks quite full so whether all those in the queue will get on board remains to be seen. Note that 13 is carrying a single arm pantograph which it would carry between June 1976 and April 1977. As for Lewis’s, it would close in 1993 and although the building still stands today it is unrecognisable having been reduced in height and reclad with the section on the corner of Victoria Street now a Poundland. 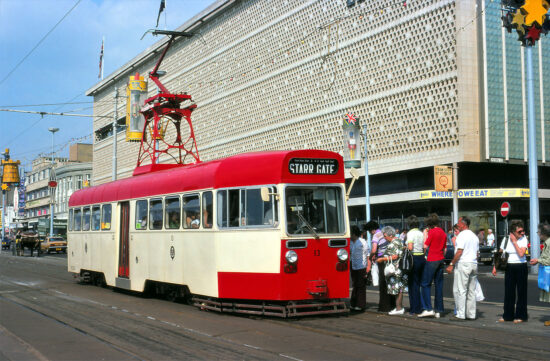