The Terror Train to return to Blackpool

Posted on Saturday 6 March 2021 by Gareth Prior

One to file under “I didn’t see that happening” is the news that a long-lost advertising livery is to be resurrected on Blackpool Brush Car 634 with a version of its 1990s Coral Island Terror Train advert to be reapplied as part of what is being described as an “eye-catching role within the heritage tram operation”.

Brush 634 is one of the trams which were transferred into the ownership of the Fylde Transport Trust at the start of 2020 and remains at Rigby Road Depot where it has been waiting a spot in the workshops for several years to complete its restoration back to working order. It is currently in a version of the 1990s fleet livery which was painted by then owner Andy Ashton during its time at Rushden. 634 was one of the trams which were displayed during the 2019 September Spectacular as the next projects due to go through the workshops before other events intervened.

The tram entered the Paint Shop on 4th March for a start to made on returning the tram to the black based advertising livery. 634 carried this advert between June 1996 and November 2000 with it replacing a design for First Leisure. Following this advert the tram finished its days in Blackpool in an advert for the Cala Gran Holiday Park.

The Fylde Transport Trust are currently discussing the project that 634 is re-receiving this advert for along with Blackpool Heritage Tram Tours and more details are expected to be shared later this year.

634 is also not expected to be the only FTT owned tram to go through the Paint Shop with the organisation revealing that they have commissioned Blackpool Transport to paint a number of their trams during 2021.

The lost of the traditional green and cream colours in favour of this advertising livery is certainly not going to please everyone but it will certainly make a change from the constant stream of fleet livery! 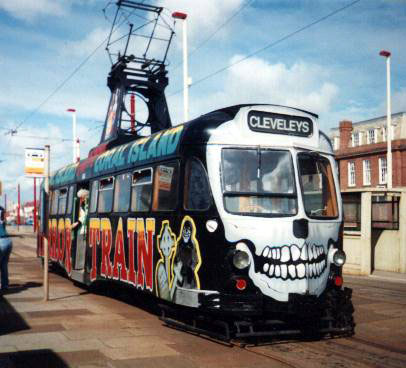 634 and its Coral Island Terror Train advert seen at Bispham during August 1996. (Photograph by Gareth Prior)

5 Responses to The Terror Train to return to Blackpool