Posted on Tuesday 9 February 2021 by Gareth Prior

The “Best of Sheffield” event held at the Crich Tramway Village in May 2014 has featured in this series before and that is where we are again heading for this edition of “Trams &”.

The premise of the “Best of Sheffield” event was pretty obvious – it coincided with the return to service of Roberts Car 510 after overhaul and aimed to showcase Sheffield’s trams with many other vehicles from the South Yorkshire city also visiting for the occasion – including a number of buses both heritage and modern.

In this view we are in the depot yard where two of the non-operational trams are seen posing for the photos. On the right is Sheffield 189 and to its left is ex-Bradford car and converted into a Works Car in Sheffield, numbered 330.

Then on the left are two Sheffield Corporation buses with closest to the camera AEC Regent 5 no. 874 which was introduced into service in April 1960 as a tram replacement on the Sheffield Lane Top to Meadowhead route. Withdrawn from service in 1976 it was preserved by the AEC Alexander Group who remain its custodians today. The other bus is no. 904, a Leyland PD3 which was new in 1959. 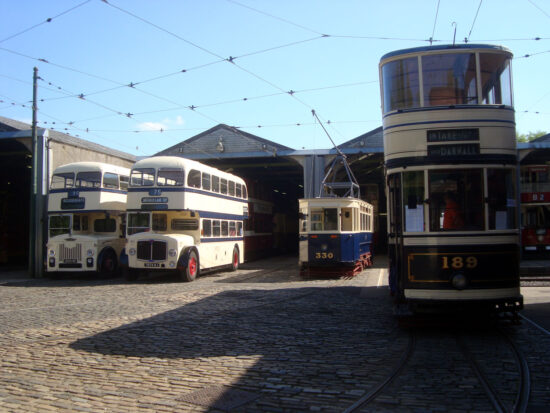