Appeal for funds to complete overhaul of the Western Train launched

Posted on Monday 8 February 2021 by Gareth Prior

Blackpool’s popular Illuminated Western Train hasn’t run since the end of 2019 and now with its overhaul approaching completion, Blackpool Heritage Tram Tours have launched an appeal to complete the work. The overhaul started last winter but has been stalled by the various lockdowns caused by the Covid-19 pandemic and now with the finishing line in sight extra funds are needed to return the tram to the operating fleet once more.

Those who follow the Blackpool Tramway closely will be aware that the staff involved in the engineering side of Heritage Tram Tours have been furloughed during periods when it hasn’t been possible for any tours to run and with little income coming in at the same time there haven’t been the funds available to complete various works. Which is where this appeal comes in.

A target of £2,500 has been set for the work to be completed (and with donations coming in quickly it looks as if this may be met pretty soon!) with a Go Fund Me page created for donations to be made.

So far the bodywork repairs have been completed and the Western Train has also enjoyed a repaint along with around three quarters of the wiring finished. But with staff furloughed it is currently sitting in the workshops waiting for the work to be completed and it is hoped that with this fundraising as soon as staff return to work in the spring the work will be able to be completed in time for the Train to return to service in time for the 2021 Illuminations.

Anyone who donates £50 or more will receive two tickets to enjoy Heritage Tram Tours either on the Western Train or another tram in the fleet – once services are able to resume again. But Blackpool Heritage Tram Tours will be delighted to receive any donations whether that a £1 or £100 – as they say “Every Little Helps”.

Update: The fundraiser has now been disabled as the target has been reached! 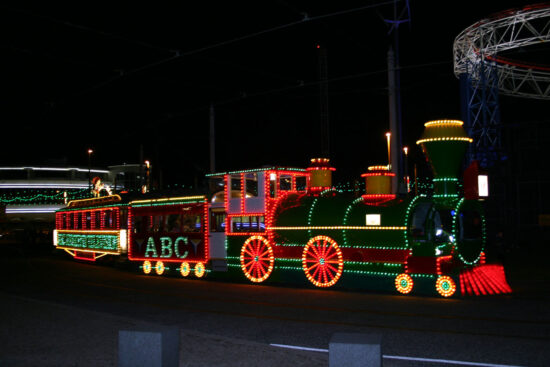 The Western Train is seen on Pleasure Beach loop doing what it does best – illumination tours. This is 21st September 2012. (Photograph by Gareth Prior)