Posted on Friday 29 January 2021 by Gareth Prior

In this latest edition of “Picture in Time” we are again heading back to Crich for another image from the archives.

When the Blackpool Tramway celebrated its Centenary in 1985 a number of trams visited the resort to add to the spectacle with a couple of Blackpool trams going on a holiday of their own to the Derbyshire countryside. One of these was Boat Car 607 (a tram which today can call Crich its permanent home having been acquired by the TMS following the great Blackpool tram sell off as the tramway was upgraded). Arriving at Crich in April 1985 the Boat Car would remain until the December of that year and would prove to be a popular visitor.

In this photo taken at Wakebridge in June 1985 we see 607 heading towards Glory Mine with a full load of passengers. As it arrives we see alongside another Blackpool  tram – one of the Boat Cars forerunners, Toastrack 166. Only seven years separated the building of these two trams and yet the design couldn’t be any more different with the Boat Car giving more protection to passengers on the legs for those chilly days as well as that little bit of shelter for the long suffering guard. The guard also wouldn’t have to worry about walking alongside the side of the tram to collect fares as it had a central gangway to make things so much easier! 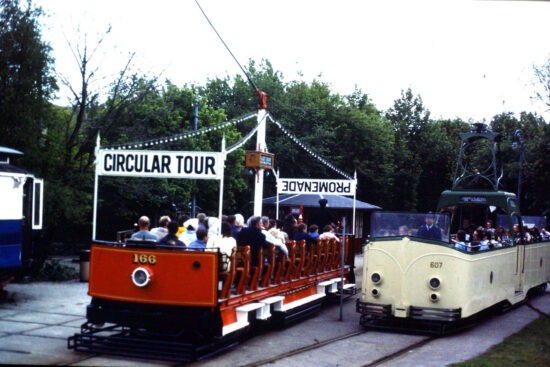