Posted on Friday 10 May 2013 by Andrew Waddington

Whilst the Centenary cars may not have exactly been the most popular type of tram to ever operate in Blackpool, the saying ‘absence makes the heart grow fonder’ certainly applies to trams. Since being retired from regaular service in November 2011, the appeal of the class has certainly grown amongst enthusiasts, hence the decision to include car 648 in the heritage tram fleet. Work is now underway to prepare both 648 and sister car 642 for use over the forthcoming late May Bank Holiday weekend as the star attractions on the heritage tram service!

Having previously managed a single day of passenger use in 2012, Centenary car 648 is now being treated to some workshop attention to make it more suitable for its new role as a heritage tram. Recent sightings at Rigby Road depot have confirmed that the tram has now had its Hounds Hill advert vinyls removed after two years, revealing the plain white base coat beneath. Over the next two weeks, its appearance will be transformed with a fresh coat of green and cream paint – the first time a Centenary car has operated in these colours since 1996. The car is expected to receive some other alterations as well before it returns to traffic on Saturday 25th May, although the work required should be fairly minimal as several of its original features were retained during its last overhaul.

Whilst 648 is under attention at Rigby Road, sister car 642 was transferred to Starr Gate depot on Friday 10th May, presumably to be commissioned ahead of a special one-off appearance on Sunday 26th May. This tram last ran in November 2011 and retains the plain yellow livery it has carried since 2006. Initially earmarked for sale, Blackpool Transport eventually decided to retain 642 as a potential source of spare parts in order to keep 648 on the road, as many Centenary car parts are incompatable with the rest of the fleet. Ultimately the tram is likely to be scrapped and so this running day will probably be the last chance ever to see this tram operating. Having not ventured onto the promenade for so long, 642 was towed to Starr Gate by a Unimog but should be made roadworthy within the next two weeks in readiness of its final day in the spotlight.

British Trams Online hope to provide extensive coverage of the next spell of heritage tram operation in Blackpool between 25th and 27th May, and hopefully the weekend’s events will be just as succesful as the May Day weekend which saw huge numbers of passengers carried by the vintage trams as well as the modified Balloon cars, which will once again be used on promenade specials on all three days. 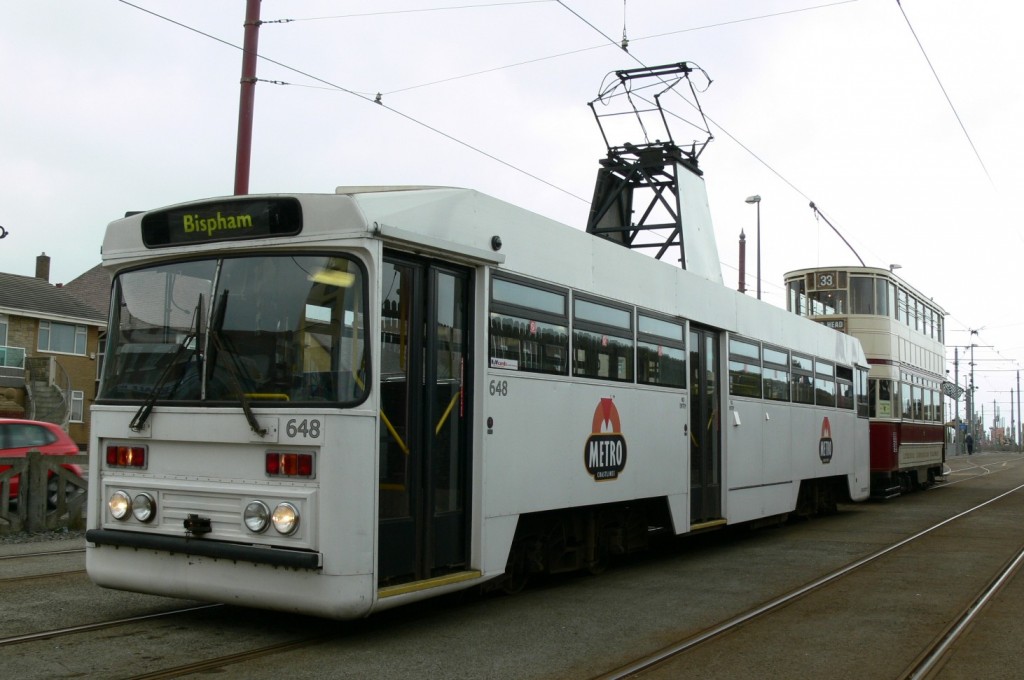 648 seen at Bispham in 2010, wearing the ghostly white livery. By the time this tram runs again, this will have been replaced by a more aesthetically pleasing coat of green and cream paint. (Photo by Andrew Waddington)