In this latest look at archive photos from the Blackpool Tramway we are again in September 1976 with the subject of our attention this time around being one of the OMO cars, a tram which have been credited with saving the tramway in the 1970s.

By the time the below photo was taken in the September of 1976 OMO 8 had been in service for two years having carried its first passengers in June 1974. Rebuilt from English Electric Railcoach 265/612 it was the eighth of 13 such trams built which helped the tramway to cut it costs with just one crew member required to operate it at quieter periods. 8 had entered service in the Plum and Custard livery but earlier in 1976 had received this Red and Cream version instead. The car was withdrawn in May 1992 and has been preserved by what is now known as the Fylde Transport Trust. Despite a brief period of operation in 2010 it is currently stored requiring further workshop attention.

This photo shows 8 and the Tower on Blackpool’s Golden Mile. The tram is off south to Starr Gate. Woolworth’s Café is advertised on the clock tower on the Woolworth’s store. Now converted into a Wetherspoon’s who would have thought that possible in 1976? 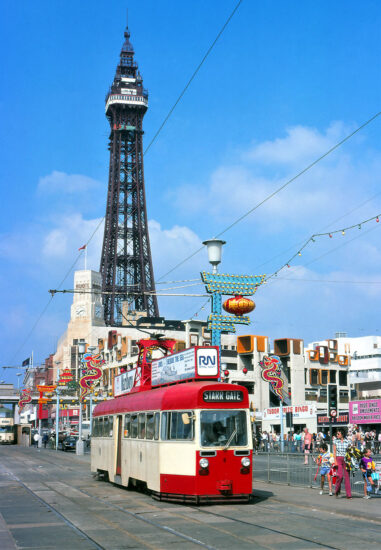