Posted on Thursday 31 December 2020 by Gareth Prior

The location for this edition of “Trams &” is again the familiar surroundings of Beamish and this time along with the tram we see a steam locomotive in action on the railway line from Rowley Station.

If you get your timing right at Beamish it is possible to get a shot of something on the tramway and railway together (get it even more right and you could even get something on the road as well – just not on this occasion!). On 9th April 2016 the timing was just right to capture this image as Sheffield 264 runs clockwise around the museum tramway with what looks like a full load of passengers. 264 had only just returned to service after a major overhaul and was looking resplendent as it got back to doing what it does best – transporting visitors around the museum.

The & part of this image has been captured on the Rowley Station railway line with steam locomotive Portbury at the head of a single coach train. Portbury was on loan at Beamish from the Bristol Harbour Railway and arrived in 2015 with its stay extended into 2016. 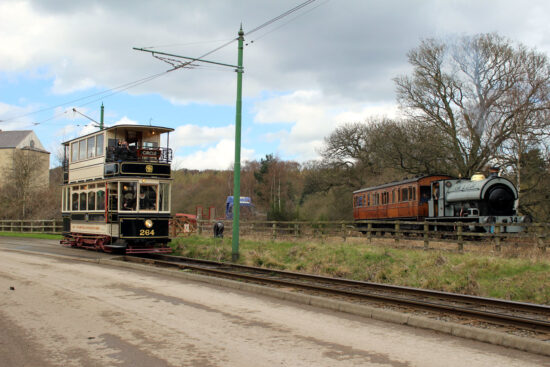