We are again off to Crich for this edition of “Trams &” and alongside today’s tram is yet another bus!

This photo was captured on 21st September 2019 at the Town End terminus where Liverpool 869 is about to move on to the loading stop for a trip along the line to Glory Mine during the first day of the Crich 60 event. With plenty of people around to enjoy the good weather of the event (weather which did not continue the following day), 869 is likely to be a popular tram to take people for a ride but they will have to wait a little while longer before that happens.

As 869 contemplates moving forward it is passed by this single deck bus which was operated by Midland General with the fleet number 175. Blinded for a journey on route E2 to Crich this bus is a AEC Regal III which was built in 1949. Note the front entrance behind the driver’s position. 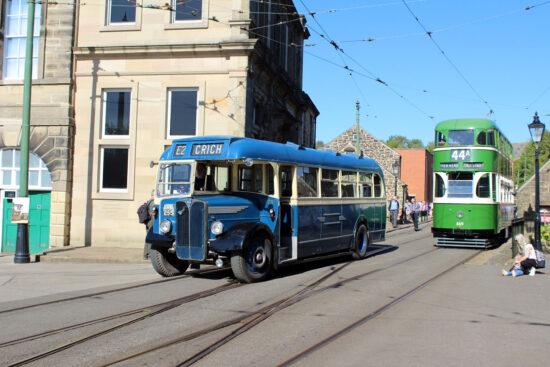