Posted on Friday 25 December 2020 by Gareth Prior

Back to the Isle of Man for another 2010 image from the Manx Electric Railway.

The chances are that if you have travelled on the Manx Electric Railway in the past (particularly when there was a set diagrammed to start and end the day at Ramsey) you would have seen a scene such as the below photo – a seemingly random crew change in the middle of nowhere! To ensure that crews end up where they need to be at the end of the day when the two sets met – wherever that may be, although presumably there was some pattern and it would happen in a pre-defined position – they would stop and allow the crews on the two trams to swap over.

Taken from the trailer of one of the sets this image, from 26th August 2010, shows the crew of Winter Saloon 19 disembarking to allow the full crew change to take place. Once both crews are in place on their new trams they will set off north and south respectively, probably with unsuspecting passengers completely confused as to what has just happened. 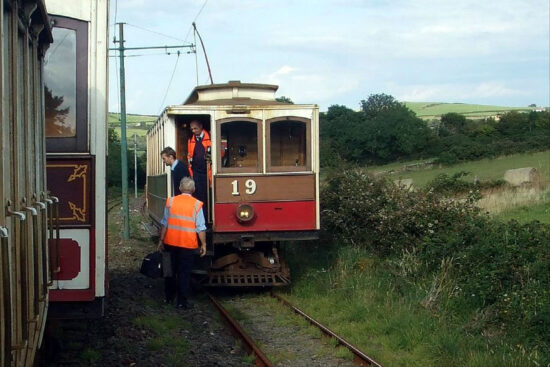