Posted on Friday 25 December 2020 by Gareth Prior

Merry Christmas everyone! As you check to see whether you’re on Santa’s good list we bring you our own festive treats as we head to Beamish for today’s “Trams &” as we take a look at one of the resident trams alongside an old van.

The tram we see in this image from 13th April 2013 is Newcastle 114 which has been specially decorated to celebrate the 40th anniversary of the Beamish Tramway with flowers and between deck boards. It is waiting at the Town stop (probably the classic Beamish shot) as passengers get themselves comfortable for a ride around the tramway or maybe just to Pockerley for the next part of their Beamish adventure.

In front of the tram on the left hand side of this shot we see a 1928 Albion LB40 Flatbed van/lorry which is lettered for C&C Textiles of Barnsley. 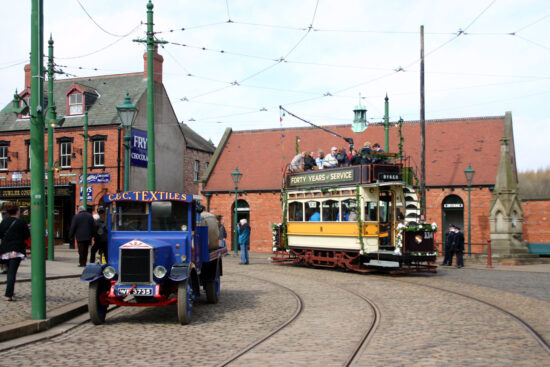