Posted on Sunday 20 December 2020 by Gareth Prior

In this latest edition of “Trams &” we are taking a look at a tram which was on holiday in the northeast at the time of this image with it being caught alongside another vehicle.

The tram we are talking about here is Lisbon 730, which is usually resident at the Wirral Heritage Tramway but in 2013 it paid a visit to Beamish. It wasn’t the only loan tram at this time with the Beamish Tramway celebrating its 40th anniversary but it was the only Portuguese tram to make the trip with its bright yellow paintwork providing a contrast with much of its surroundings. This photo was taken on 13th April 2013 with the tram just stopping at the Fouldbridge stop with a clockwise trip around the museum circuit.

It is joined in this image by a Beamish resident, access bus J2007. Built in 2007 to provide those visitors at Beamish with less mobility with an easy way to get around the museum it has proved to be a useful addition and will be joined by a second access bus in the coming years. The bus is just coming out of the depot complex at a time when the buses still lived with the trams. 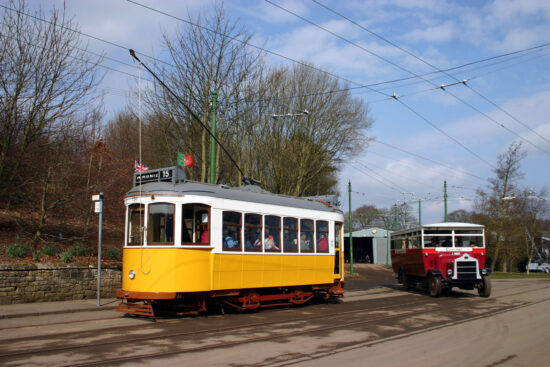