Posted on Monday 30 November 2020 by Gareth Prior

“Picture in Time” is again heading to Blackpool for today’s archive image and its an unusual sight this time out.

In their over 85 years of service it is probably fairly likely that the number of times a Boat Car had ended up having to rescue another tram and tow it back to depot is pretty low. But on 16th August 1993 that is exactly what happened when Boat 606 was called upon to take Balloon 700 back to Rigby Road. The errant Balloon Car is receiving fitters attention to remove the pantograph – which had presumably been damaged beyond repair – and would need assistance to get back to depot so that it could be fixed and returned to service. With the Boat Car immediately in front it made sense for it to undertake this role although its presence on the Prom would be missed considering it seems to be a warm and sunny day. A further two Balloons and a Twin Car can also be seen on the loop.

In this photo 606 is in the blue and yellow livery it originally received when it went to the Glasgow Garden Festival but by this time had received adverts for Family Kitchen on top of this. The tram, now in the US having been a makeweight in the deal to return Standard 147 to Blackpool., would receive an inverted livery in these colours a few years later. 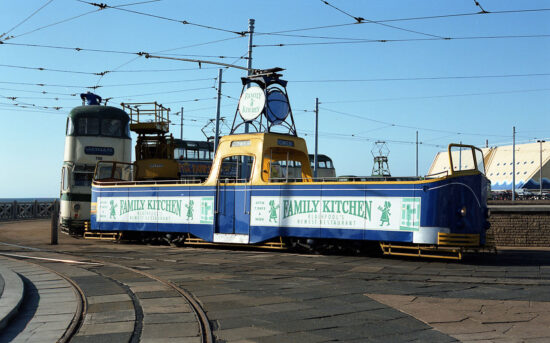