Today “Picture in Time” is back in Blackpool as we take a look at an image captured during the Centenary celebrations in September 1985.

As so many photos in Blackpool are, this image shows the unmistakable Tower in the background as tram congregate heading in both directions along the Promenade. Three different classes of tram are seen here but the tram closest to us is Twin Car 676+686 with the motor leading with a service to Pleasure Beach as we look at the back of the tram. Set 6 had been permanently coupled in 1969 with the motor having started out life as English Electric Railcoach 276 and being one of the first two trams converted into a Twin Car back in 1958. It is seen here in the traditional green and cream livery, colours that it would keep to the end when it was withdrawn at the end of the 2004 season, being one of the unlucky Twin Cars not to receive mini overhauls and a Metro Coastlines repaint. The tram does remain at Rigby Road Depot, however, although is store waiting for that chance to be restored to service.

Also in this image we see a Red and White OMO car heading south as a Balloon Car – in the 1980s fleet livery – heads north. 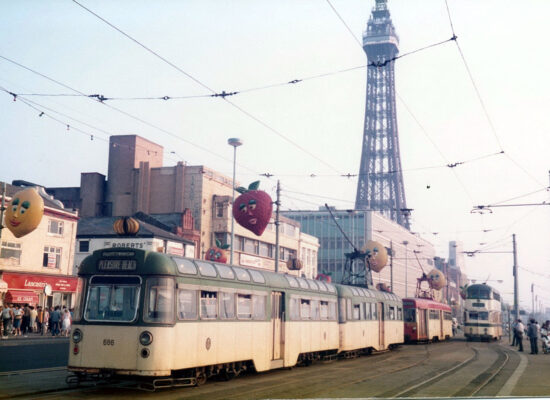