FTT trams continue to progress towards a return to service

Posted on Sunday 22 November 2020 by Gareth Prior

Two of the Fylde Transport Trust’s have continued to make steps towards a return to service in recent weeks with work having taken place on both Railcoach 279 at Brinwell Road and Coronation 304 at Rigby Road.

Firstly, some work was completed on Coronation 304 at the end of October. This concentrated on the air door rams and the recently overhauled air compressor to make sure everything worked as it should. A LED voltmeter has also been trialled which it is proposed will be fitted discretely in both cabs to indicate to the driver the battery and charging voltage.

Meanwhile, although there hasn’t been a lot of progress recently on Railcoach 279 the electrical contractors have recently returned to fit the cab bulkhead panels and switches. Progress is also being made by a contractor on the fabrication of the cab windscreens but this work has been delayed as they also have a large contract with the NHS to complete.

The other high profile FTT tram which remains off the road is Standard 143. The last update revealed on this last month was that the defective motor remains away at a contractor with its return awaited ahead of refitting and then testing. 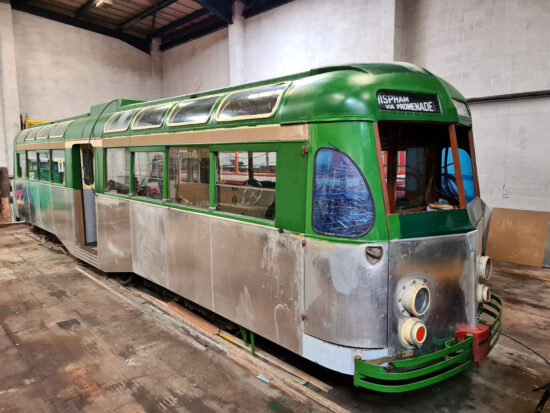 This recent picture shows Raicoach 279 at Brinwell Road as progress continues on its restoration. (Photograph courtesy of Fylde Transport Trust)