Posted on Wednesday 1 May 2013 by Andrew Waddington

The Fleetwood Heritage Leisure Trust have announced that its preserved Blackpool Brush Railcoach 290, which was repainted as a static feature for the 2012 illuminations season, will be remaining on display in its current location throughout 2013. However, the tram will lose its special commemorative livery for the Queen’s Diamond Jubilee in favour of a brand new design this summer.

290 (or 627 if you prefer to call Blackpool trams by their post-1968 fleet numbers) was placed on a short section of track within the Pleasure Beach tram loop last August and was a popular feature of the 2012 illuminations. However, plans for the car to return to Kirkham Prison – where its makeover took place – have never materialised and the tram has remained in situ ever since, seemingly abandoned by its owners. Happily, steps are now being taken to improve 290‘s external appearance and the car is expected to be repainted again during June. The tram will receive a new livery as part of a community street art project and will retain its illuminations. In this new guise, it will remain on display for the rest of the year before hopefully moving to a more permanent home in Fleetwood at some point in 2014.

This development is also potentially good news for the Trust’s other Brush car, 621, which now looks set to remain at Kirkham Prison for the forseeable future. This tram had previously been earmarked to take 290‘s place as a static exhibit at Pleasure Beach this year, but it now seems that attention has been turned towards refreshing 290‘s appearance and presumably 621 will now have to wait a little longer for attention. Enthusiasts had not responded well to the suggestion that the first Brush car ever built would be used as an illuminated novelty feature, and so the news that this tram is likely to remain undercover at Kirkham in its current condition should be well received. Hopefully any future conservation work undertaken on the car will reflect its historic value and see 621 regain a more dignified appearance in the future.

The FHLT is now seeking sponsorship for 290‘s ‘Art Installation’ repaint and any organisations or individuals willing to support the project will be acknowledged on the boards displayed on the fencing around the tram. 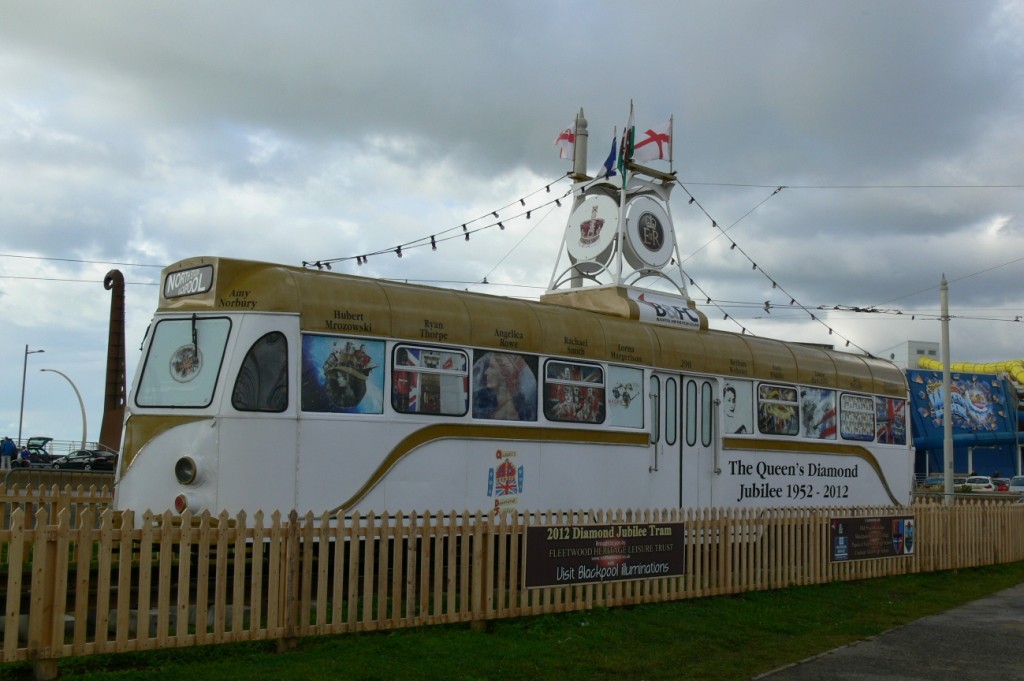 A threatening sky descends over 290/627 in its 2012 'Diamond Jubilee' livery, soon to be consigned to the history books, although the tram will remain in this position throughout 2013. (Photo by Andrew Waddington)