In Pictures: First track laid as part of Trams to Newhaven project

Posted on Saturday 7 November 2020 by Gareth Prior

When you’re constructing a new tramway or tramway extension there are always key milestones – the start of the actual work, laying of track, installation of overhead, building of tramstops to name but a few. And the Trams to Newhaven project in Edinburgh has achieved one of those recently – with the first track on the line laid at Ocean Terminal.

The section around Ocean Terminal is further ahead than other sections which have seen construction so far as some of the work had been previously completed as part of the original tramway project which meant it was always likely to receive some of the first track and so it has been proved. The project timeline had said that the first section of track would be down in November and that is something else which has been proved to be correct!

So far, just a small section of around 50 metres has been laid – with it being installed during the week of 2nd November – but this is a key milestone in the project and is the first obvious and tangible signs of progress which will be able to be seen by the general public. Not only had track gone down but even the final top surface has also been put down by the contractors.

50 metres down – lots more metres to go! But they have another two and a bit years to do it all in!

The laying of the first track comes as an updated business case shows that everything is still on track to be completed by spring 2023 within budget – despite the challenges of Covid. The review of the business case has aimed to assess the impact any changes in public transport demand as a result of Covid could have on the original business case which had been approved back in March 2019.

Financial assessment has found that the project can still be delivered within the £207.3 million budget and that in all but one of the scenarios looked at as part of the review the impact on the Council’s reserves if the project is cancelled would be greater than continuing with construction. While it is possible that there could be a future call on the Council’s reserves to support financing costs as a result of COVID-19 in each of these scenarios the scheme will finance itself – although this would be achieved in different timeframes.

Cllr Lesley Macinnes, Transport and Environment Convener, said: “It’s clear that the events of this year have had an unprecedented impact on the way we travel and that we’ll continue to feel the effects for the foreseeable future. In light of this, it’s essential that we assess the potential economic and financial impacts on such a significant transport infrastructure scheme. I’m pleased that the economic and financial cases for Trams to Newhaven hold up despite the ongoing pressures resulting from COVID-19. The delivery of this project is essential for the Capital’s green recovery, providing sustainable, low-carbon travel to one of the city’s most densely populated areas. We now have reason to be cautiously optimistic as we progress with construction.”

It is mentioned that as a result of the pandemic that there has been a significnat drop in demand for all public transport in Edinburgh and the trams are obviously not immune to this which does mean the amount of income coming in will be reduced to that originally expected. This review has taken this into account  and even the most optimistic models suggets passenger numbers will not return to pre-pandemic levels until the mid-2020s. It is also confirmed that it is recognised Lothian Buses are also being affected by a fall in revenue  and this review does not rely on any additional payment of the extraordinary dividend which was antipated in the original Final Business Case.

The Transport and Environment Committee will meet on Thursday 12th November to discuss this review of the Final Business Case and will be asked to approve the continuation of the project.

The revised Final Business Case can be viewed online at https://democracy.edinburgh.gov.uk/documents/s28759/7.2%20-%20Tram%20FBC_Final.pdf. 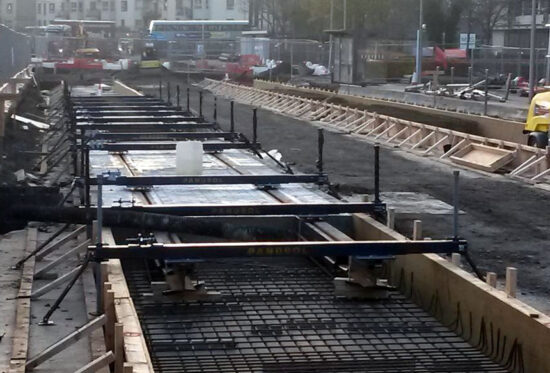 Looking through the fencing in the immediate foreground we see the spacers in place ready for more track to be laid but further along this view we see the very first track of the Trams to Newhaven project. 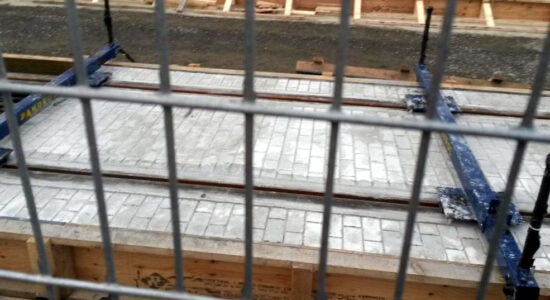 And a closer view of the new track complete with new road surface installed. (Both Photographs by John Hampton)