Posted on Monday 24 August 2020 by Gareth Prior

Of the trams which took part in the 1985 Blackpool Tramway Centenary without doubt the most unusual visitor was the former New South Wales locomotive, known as “John Bull”, and that is what features in this edition of “Picture in Time”.

Of course, it wasn’t just the Blackpool Tramway which was celebrating its 100th birthday in 1985 as “John Bull” also dated from 1885 and was a late addition to the celebrations following the completion of its full restoration. Although restored to its New South Wales Government condition “John Bull” – or no. 47 to give it its number – was only used in Australia for around gives years before returning to the Beyer, Peacock factory by 1890 where it was used for shunting duties losing many of its tramway features. Withdrawn from this use in 1959 it found its way to Crich and saw some use but 1985 was in fact the last time it was steamed and it is now a static exhibit.

In this photo we see “John Bull” along Blackpool Promenade with Brush Car 623 (I think!) in hot pursuit. The Brush Car is operating in service to Starr Gate on route 16. 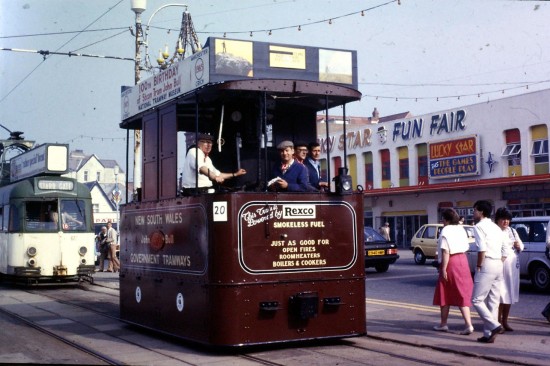