Posted on Sunday 5 July 2020 by Gareth Prior

In this latest instalment of “Trams &” we head to Sheffield for a view of one of the trams on the Supertram system along with a bus.

This image was taken at the Halfway terminus with its excellent interchange available between tram and bus – just a short walk between the two to continue your journey whether that be bus-tram or tram-bus. At the single tram platform 120 stands with its destination display yet to be changed for its next trip to Malin Bridge as the crew take a break at the far end of the platform. Of course, 120 became a celebrity in 2010 when it was repainted into this livery celebrating 50 years since the closure of Sheffield Corporation Tramways – a livery which was intended as a short-term measure but which has now remained in place for nearly 10 years! At the adjacent bus stop is a Stagecoach bus which is running on service 120 to Fulwood. The bus is numbered 12095 and is a Dennis Trident 2 Hybrid. The photo is dated 11th September 2016. 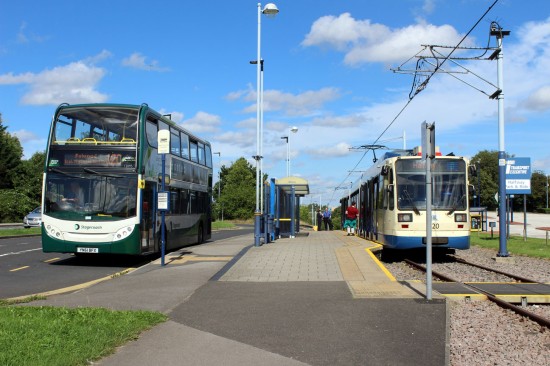