Posted on Saturday 27 June 2020 by Gareth Prior

Its red everywhere for this edition of “Trams &” as we see three different types of vehicle which once operated in the capital – tram, bus and trolleybus.

Taken in July 2012 this photo shows London Transport 1622 – an E/1 class of tram built in 1912 and sold off for further use post World War II from where it was rescued by the London County Council Tramways Trust who saw the tram restored the tram into a rehabilitated condition with this seeing the tram launched into service in 1999. Having spent periods out of service, the tram has been in the workshops at Crich for a while and was due back in service during 2020, although obviously work has now stalled.

Here we see 1622 just about to pass The Red Lion at Crich where it passes two other vehicles from London. In front is Leyland Titan 7RT, RTL1163, which entered service in 1951 (when it was introduced as a tram replacement) and entered preservation in 1996 having been sold on from London Transport in 1963 for further commercial use. The second vehicle is 1948 Q1 trolleybus 1812 which would remain in service in the capital until 1961. After that it spent time in Spain where it ran in Santander before returning to the UK and undergoing restoration back to serviceable condition. 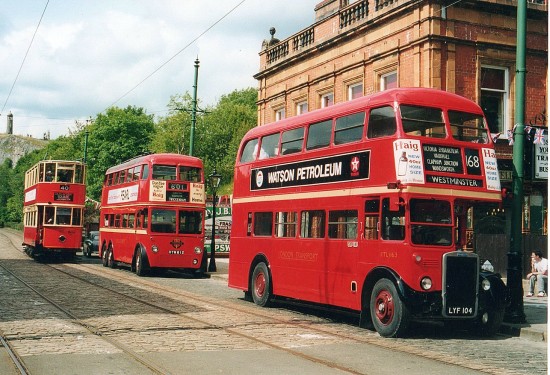