Posted on Wednesday 24 June 2020 by Gareth Prior

Today is our final look at an archive image from Manchester Metrolink for this latest batch of “Picture in Time” and its 1011 seen on the first day of services to Piccadilly.

As it’s the first day of services to Piccadilly that makes the date of this image as 20th July 1992 when the first phase of Manchester Metrolink was finally completed – some three and a half months after the first public services had started on the section between Bury and Victoria. We are looking at 1011 here which has just crossed London Road having come out of Piccadilly Station undercroft and is now working a service running to Altrincham. Like much of Manchester City Centre this is a location which has changed almost beyond recognition over the past 28 years with the area that the tram is now running through being the home of Transport for Greater Manchester along with other developments too. Judging by the small number of passengers on board the tram there was still be some publicity persuading people to take the tram out of Piccadilly but that would soon come with trams now often very full in this location as the system goes from strength to strength. 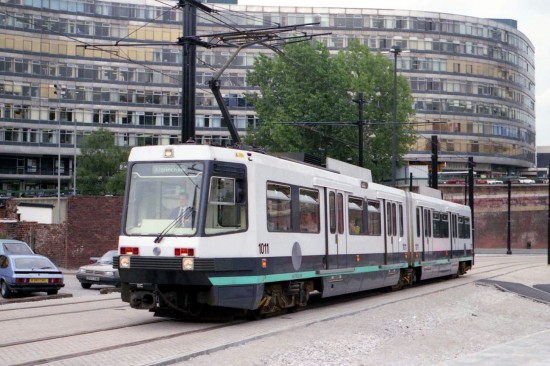