Posted on Wednesday 10 June 2020 by Gareth Prior

Another 1992 image from Manchester Metrolink features in today’s “Picture in Time” and this time its before public services had even begun.

This photo was taken on 25th February 1992 and shows two trams at Victoria stop in between testing duties. The main tram we can see is T68 1004 which is at the city end of the usual outbound platform whilst we can also see 1002 in the double-length platform. You will note that 1002 is named “Manchester Arndale Voyager” – this was the very first tram to be named in Manchester and like so many more to come after this it was merely an extra form of publicity, in this case a food court at the Arndale Centre. The name would remain in situ until September 1996. As for 1004 its first name wouldn’t follow until November 1994. 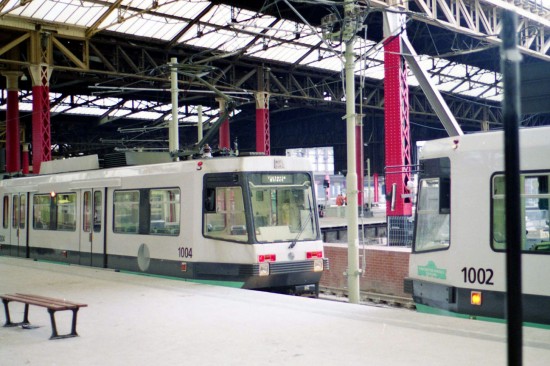