We head back to 1975 one final time today as we take a look at another of Blackpool’s trams – OMO 11.

This photo – once again taken on 6th July 1975 – is at North Pier, with the pier to the left, as OMO 11 is working on route 11 to Starr Gate. Painted in the Red and White fleet livery as carried by the OMOs once the Plum and Custard style was discontinued this tram started off life as English Electric Railcoach 268 (renumbered 615 in the 1968 mass renumbering) before conversion into an OMO car. Entry into service in its one man condition came less than two months than this photo was taken with the first passengers carried during the May of 1975. Despite the relatively short period of time the tram had been in service the trolley pole has still managed to become slightly bent! 11 would go on to be the last of the OMOs to be withdrawn with its final use on 18th March 1993. After use as a test tram it would be broken up at Rigby Road in September 2000. 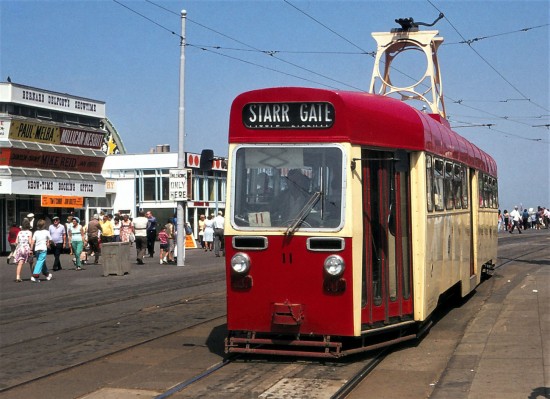