Posted on Tuesday 11 February 2020 by Gareth Prior

“Storm of the Century”, named Ciara in the alphabetical naming sequence used by the Met Office in recent years, has seen severe disruption for UK tramways with not only strong winds but heavy rain leading to service changes. Blackpool, Edinburgh, London Tramlink, Manchester Metrolink and Nottingham Express Transit have all reported disruption in recent days with Blackpool in particularly badly affected with complete service suspensions on two occasions due to the strong winds battering the Fylde Coast.

One of the best selling points of the Blackpool Tramway is its location right on the coast allowing picturesque views as you go about your daily business of travelling by tram. That is when the weather is nice anyway as one of the worst aspects of the tramway is its location directly on the coast! On Sunday 9th February and Tuesday 11th February the complete tramway was suspended as a result of the high winds owing to safety risks.

This didn’t just effect the core Flexity service either as Heritage Tram Tours are currently scheduled to be running daily to cover February Half Term school holidays but the decision was made that no heritage trams would make it onto the Prom on Sunday 9th, Monday 10th or Tuesday 11th February. As things stand at the moment they will resume on Wednesday 12th February but please check if travelling for the heritage trams. Of course, this weekend (15th/16th February) is set to see the next Winter Gold weekend although Storm Dennis is now apparently on the way to do his worst in the wake of Ciara.

North of the border in Edinburgh and it was rain that caused issues with flooding at Edinburgh Airport leading to services being suspended between Gyle Centre and the Airport from approximately 1230 until 2030 on Sunday 9th February. Passengers were advised to use the Skylink bus 200/300/400 between these two locations instead. Photos on social media showed that the water was above track level at the actual tramstop.

Down on London Tramlink and it was back to strong winds being the culprit. The glass in the canopy over the eastbound platform at East Croydon (the platform closest to the railway station) shattered during the morning of Sunday 9th February which led to this platform being closed to passengers. The Police cordoned off the area, the main entrance to the railway station was closed and eastbound trams (those for Beckenham Junction, Elmers End and New Addington) were unusually sent through the centre platform but did not stop to pick up passengers. The westbound platform was still open to passengers but precautions were taken here too as passengers were only allowed the glass canopy covering this platform when either boarding or alighting.

Into the same afternoon and a large tree fell between Gravel Hill and Coombe Lane (for those unfamiliar with the route of London Tramlink, this section of route features a lot of trees, well one less now!). New Addington trams from Croydon terminated at Lloyd Park with a shuttle service provided between Addington Village and New Addington. The tree was removed within a few hours but did cause damage to the overhead which needed repairs meaning the revised service was in action for most of Sunday 9th February.

Staying with the subject of trees and that is what caused problems on Manchester Metrolink (again Sunday 9th February). No services were able to travel between St Werburgh’s Road and East Didsbury and also from Shaw & Crompton to Rochdale Town Centre.

And finally, to the East Midlands where more strong winds were the cause of disruption on Nottingham Express Transit. Again the wind brought trees down with disruption between The Forest and Old Market Square and also from Clifton South to Nottingham Station. Damage to the overhead meant this disruption continued for much of Sunday 9th February but after overnight working by engineering staff it was possible to operate a near full service from the start of the next day. However, NET has also been suffering with delays because of heavy traffic caused by the closure of Clifton Bridge, compounding delays across the network.

It just goes to show when the weather does its worst there isn’t much which can be done! 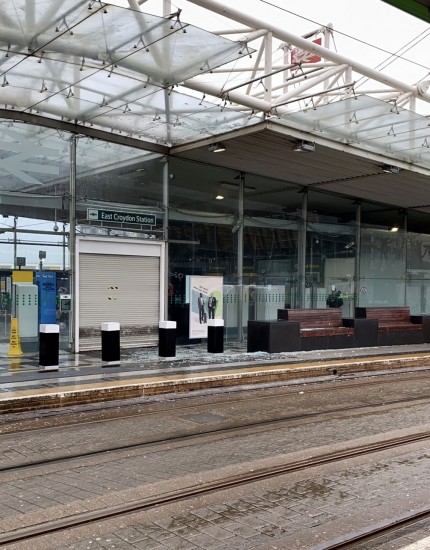 The scene at East Croydon on 9th February showing the shattered glass from the canopy on the platform and the main station entrance closed. 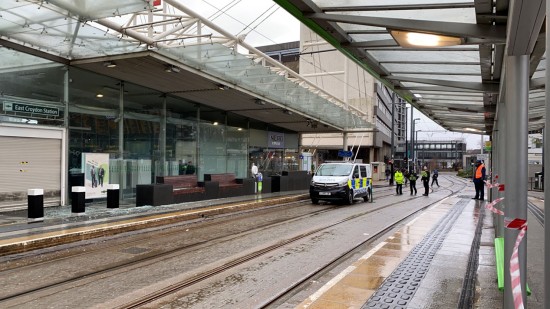 Police cordon in place and tape to reduce access to passengers. (Both Photographs by David Brinkworth, 9th February 2020)