Posted on Tuesday 7 January 2020 by Gareth Prior

There is no such thing as a closed season for Blackpool Heritage Tram Tours! No sooner had 2019 finished than the 2020 season was up and running on Saturday 4th January with the first day of the revised timetables in operation.

Based on experience gained from year round operation the timetables which will be used for 2020 are slightly revised although Blackpool Heritage Tram Tours will still continue to operate for 256 days of the year (that is if I can count anyway!), this includes every day from Monday 1st June to Sunday 8th November with the exception of Friday 4th September.

There will be five different timetables operating during the year with only the Gold timetable during “event weekends” remaining more or less the same as in 2019. The Promenade Tours Blue timetable will now see one tram running in the morning and two in the afternoon although will now see the first and last tram of the day running through to Bispham (previously the northern extremity of this timetable was Cabin). There is also an afternoon Cabin trip with all other journeys between Pleasure Beach and Tower and North Pier.

The big changes are on the Green timetable which when operated in 2019 saw four trams running between Pleasure Beach and Bispham/Little Bispham but will now see just two trams running all day with most journeys on the Prom but with some also extended to Bispham. The afternoon will then see a third tram come into service to run a Coastal Tour to Fleetwood and back.

New for 2020 will see a Pink timetable which utilises just one tram during the afternoon – this will mainly run on days where previously no heritage service operated – whilst the established Purple timetable will again run on illumination weekend afternoons with two heritage trams in action.

There will also be fare changes with the Heritage Day Travelcard increasing to £12 for adults (children £6, family £28, concessionary Travelcards valid for just heritage trams can be purchased for £10). Whilst this is an increase in cost it still provides excellent value for money as aside from the concessionary version it still allows unlimited on all heritage trams, modern trams and Blackpool Transport bus services.

The Promenade Tour ticket has also seen changes for 2020 with this now allowing two round tours instead of £1. This ticket costs £4 for adults and £2 for children. Tickets for The Coastal Tour (trams to Cleveleys and Fleetwood from Pleasure Beach, Tower and North Pier, Cabin or Bispham) cost £6 for adults and £3 for children.

As alluded to earlier the season has already got underway with Railcoach 680 and Balloon 723 running on Saturday 4th January and Brush 631 and Balloon 717 (replaced by Balloon 700) operating the following day.

* The full timetables and fares can be viewed on the Blackpool Heritage Tram Tours website. 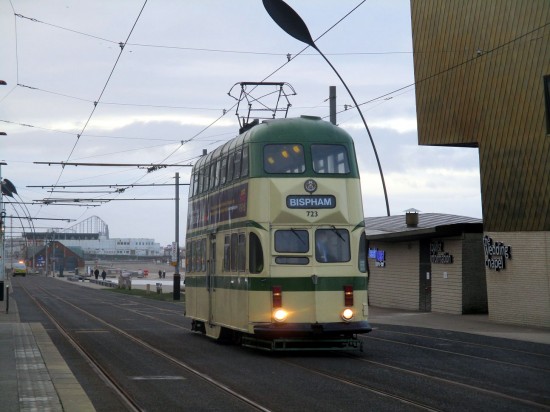 The first public heritage tram of 2020 approaches Tower and North Pier on 4th January with the morning service to Bispham. This is Balloon 723. (Photograph by Rob Bray)

1 Response to Another year starts for Blackpool Heritage Tram Tours