Posted on Thursday 31 October 2019 by Gareth Prior

This week’s Thursday archive image again comes from the Glasgow Garden Festival in 1988 as we take a look at the third of the trams running during the event – Paisley 68.

Another tram returning home to Glasgow for the event from Crich, Paisley 68 had been introduced into service back in 1919 just four years before the Paisley system was taken over by Glasgow Corporation and so its career as a red and cream Paisley car was fairly short-lived. Built as an open top double decker the tram became 1068 upon takeover by Glasgow and over the years it became an enclosed Standard type car running up until 1953 when it was withdrawn. Acquired for preservation it eventually made its way south to Crich in October 1960 where it was decided to restore it back to its original open-top deck condition as Paisley 68 once more. Having returned to service in this condition 68 was chosen as one of the trams for the Glasgow Garden Festival and was used in publicity by the Scottish Tourist Board. After the festival it was back to Crich where it continued to run as 68 until 2009 when it was taken out of service – it then received a repaint and reidentity into Glasgow 1068 and ran in this state both at Crich and at Beamish.

This view shows 68 – complete with adverts applied for the festival – with a full load of passengers on what looks like a sunny but chilly Glasgow day in 1988. We can also see the paddle steamer Waverley on the opposite bank of the Clyde here, a boat which is, just like the tram currently sidelined with fundraising ongoing to repair it once more. 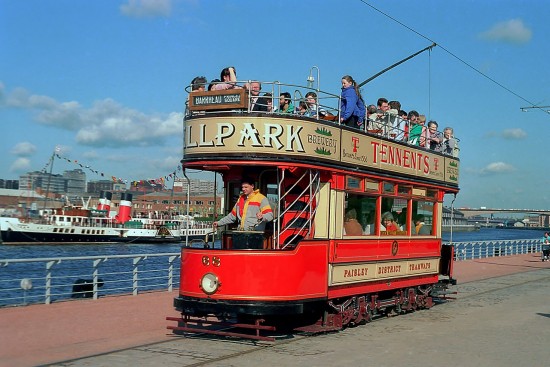 1 Response to Picture in Time: Paisley 68