In Pictures: 21 gains the full blue livery leaving just one tram to go

Posted on Wednesday 30 October 2019 by Gareth Prior

The days of any resemblance of the old Network West Midlands livery are rapidly drawing to a close with 20 of the 21 strong Urbos3 trams now carrying the full blue vinyls – 21 is the latest to join the ranks leaving just special liveried 19 left with white/silver sections. 21’s new livery retains the red based adverts for Just Eat.

21 was first seen in service sporting its new look on Tuesday 29th October with the tram again identical to 18 (a tram which received the blue vinyls earlier this month whilst also retaining its Just Eat adverts).

With 19 now flying the flag for the old brand it looks set to be very soon that there is a fairly uniform look to the fleet (except for the various adverts carried on the trams) for the first time since July 2018 when 31 became the first tram to receive the blue vinyls. How long 19 will remain blue-less remains to be seen but judging by how quickly trams have gone blue recently it isn’t likely to be too long – whether it keeps its special 20th anniversary vinyls at the same time remains to be seen, as it always does! 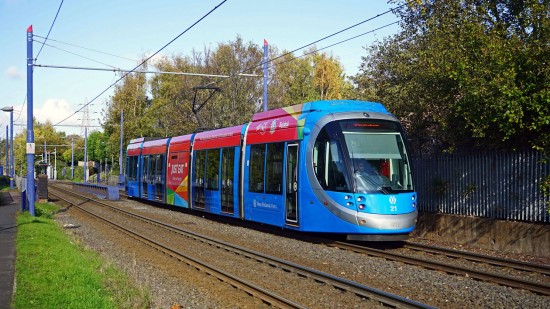 21 leaves Black Lake behind as its off to Birmingham in autumnal sunshine. (Photograph by Andy Walters, 29th October 2019)