In Pictures: 36 gets full blue livery

Posted on Saturday 26 October 2019 by Gareth Prior

The latest tram to receive the full blue West Midlands Metro livery has been 36, with the CAF built tram retaining its adverts for the My Metro App in the process. As you may remember 36 was the very first Urbos3 to receive external advertising in February this year when it became the first tram to also run in this hybrid livery between the old Network West Midlands and West Midlands Metro colour schemes and now some eight and a bit months later and its all change on the tram once more. 36 was first noted in the new livery on 25th October as captured by Mark Cufflin. 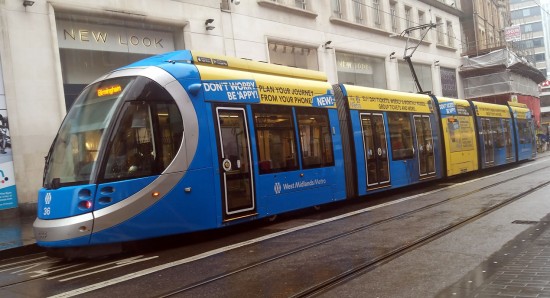 36 is seen on an inbound working to Grand Central at Corporation Street complete with blue livery and My Metro App vinyls. (Photograph by Mark Cufflin, 25th October 2019)