Posted on Thursday 24 October 2019 by Gareth Prior

Its another trip to the Glasgow Garden Festival for this edition of Picture in Time as we view another of the trams in operation on the temporary timetable.

This is the second of the trams that returned “home” to operate at the festival as is Glasgow 1297 – a tram we saw a few weeks ago in this series operating at Crich but in 1988 it made the trip back up to Glasgow to run on this very special tramway. 1297 is a tram which has travelled around the UK a bit to run on other tramways with it operating in Blackpool for that tramway’s Centenary in 1985 but just a few years later it was off on the road again as it headed to Glasgow. The tram would go on to run over 4,000 miles across the five month long festival.

This photo shows 1297 alongside the P&O ferry “St Sunniva” with adverts for Stakis Hotels on the side. 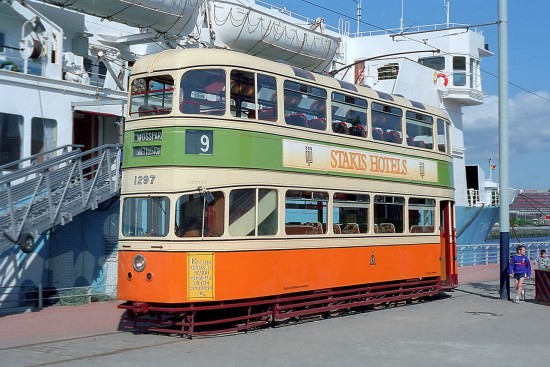 2 Responses to Picture in Time: Glasgow 1297